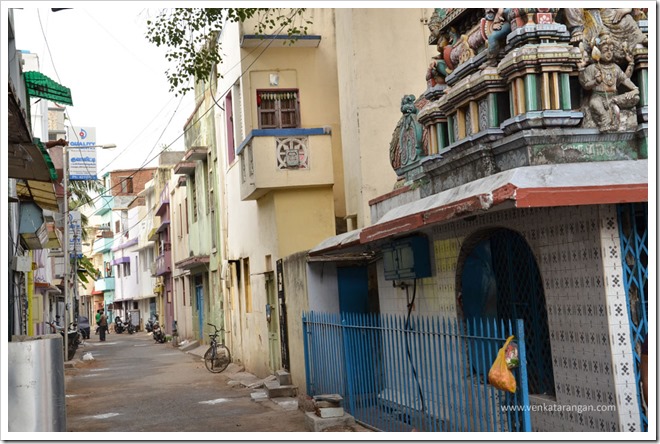 Following the tour of last week on Old Fort Wall of Madras, today I went for a tour on “The Heritage of Alwarpet” conducted by Mr Sriram V.

We assembled opposite of Sri Sankara Hall in T.T.K. Salai and proceeded south. Our first stop was under the flyover in C.P.Ramaswamy Iyer Road near Mookambikai Complex. Mr.Sriram started by saying Alwarpet is rich in heritage and there are 45 different personalities/locations (most of late 19th and early 20th century) in this area that have a story to tell. In most of the stories, Mr Sriram said most of the personalities were Lawyers and Film stars, as Alwarpet was the “Posh” area of Chennai in those days. British records mention “Alwarpett” as a village dating back to 1777.

Next stop was near the Ganesa Temple in the junction of Bharathidasan Salai & TTK Road. In one of the houses in the lane where it is said famous Tamil writer Mr Jayakanthan lived during his early days. Sriram says he used extensively work from another famous author Ashokamitran’s account of Alwarpet in his books which were brilliant and detailed of the area.

The next stop was near Abhiramapuram 4th Street, where a board stands “Sir John D’ Monty Trust” in front of De Monte Colony Corporate Park, but it had so much of history to say. By the last Will executed on 19.7.1820, one Mr John D’Monte had given all his fortunes in favour of various charitable institutions under the management of the Bishop of St.Thome. Today this covers much of the area in what is “THE” most expensive real estate in Chennai – Boat Club Road area. Over the years this endowment has seen much mismanagement of the will and several court cases.

Then we turned into Eldams Road and entering C.P.Ramaswamy Foundation. Though I have been through Eldams Road many times I haven’t been to this compound, the place is so calm and removed from the hustle of the main road outside. Mr.C.P. was a great multitalented personality – he was a successful lawyer, Advocate General of Madras Presidency, Viceroy of India and then Diwan of Travancore. He has many social reforms to his credit including administrative reforms as the Temple Entry Proclamation, universal adult franchise and the midday meal scheme in Travancore state. His critics claim he was reluctant in merging Travancore with the Indian state.

Near this area is Seethammal Colony (off Bharathidasan Salai) where my aunt used to live, it was named after the wife of Mr.C.P.Ramaswami Iyer.

Then we got into Murray’s Gate Road, which was named after The Hon. Leveson Granville Keith Murray, son of the 4 Earl of Dunmore lived at Dunmore House between 1822 and 1831, when he was Collector of Madras. In this area (Murray’s Gate Road) lived one of the most famous female stars of Kollywood – Smt. K.B.Sundarambal. Born in 1908, she married in 1927 the superstar of those Sri S.G.Kittappa. When he died she retired from public life and upon great persuasion by her well-wishers including Kasturi Srinivasan, A Rangaswami Iyengar (both of The Hindu), G.A. Natesan and S. Satyamurti, she resumed her film career. She lived in Murray’s Gate Road till her death in 1980 and is known for her Avvaiyar role done in 1953.

We moved near Venus Colony (Venus Pictures), where it was all about the early days of Tamil cinema. It was here somewhere was Whales Studios where M.G.R.’s first film Sathileelavathi was started. In this area lived and died in 1904 at the age of 39 in Dunmore house was the famous female Poet Adela Florence Nicolson who wrote the Garden of Kama in 1901 under the pseudonym Laurence Hope, which won international acclaim. Somerset Maugham’s short story, The Colonel’s Lady is supposed to be based on her story.

Next are the two street names which I have seen many times while going through Venus Colony, Maharajah Surya Rao and Maharani Chinnamma Roads. The Maharajah’s of Pithapuram when in Madras, lived at Dunmore House, at the end of Murray’s Gate Road. To this couple was born at this home on 12th May 1917, Sita Devi. Stunningly beautiful, she married the Zamindar of Vuyyur, but well in love with Maharajah of Baroda (one of the richest men in the world then). She got converted to Islam, divorced Zamindar, converted back to Hinduism and then married Maharajah. The couple settled in Monte Carlo & had a son called Princie. When princely states were abolished by Sardar Patel, much of Maharaja’s wealth was taken away but Sita Devi had by then pocketed many of the crown jewels of Baroda to France.

Then we were in Bashyam Basheer Ahmed Road, Ambujammal Street and Sriman Srinivasan Road.

Sriram explained the story behind how the street was named after two giants of legal field – K. Bhashyam Iyengar and Basheer Ahmed Sayeed, showcasing the unity behind two religions here. Bhashyam Iyengar took to the defense of people arrested for involvement in the independence movement. The famous SIET Women’s college in Chennai is named in memory of Basheer Ahmed.

Ambujammal was the daughter of Srinivasa Iyengar, another famous advocate of Madras. She took Gandhiji to be her foster father. She authored many books and participated in many ways during the freedom struggle. She was awarded Padmasri in 1964.

In this area, you can see a very old house (seen below) that was about to be demolished when we were there. This is where the first civil court in the whole of South India was set up under an Act in 1843, it was called Sudder Dewanny Adawlut at the Sadr Gardens.

Then we got back north in T.T.K. Salai, stopping in front of the famous Ethiraja Kalyana Nilayam. This is named after Guruvaya Chetty and his wife Ethiraja Ammal who lost their only son at a young age.

Interesting to note that to the opposite of this is a Maratta Education Fund.

For finishing the tour we went to Radhakrishnan Salai Hotel Saravana Bhavan for a tasty breakfast. Sriram had a story for this road too, in its earlier name Edward Elliot (named after Edward Francis Elliot, Chief Magistrate and Superintendent of Police, Madras). In 1838 Isabella Napier, wife of Col Johnstone Napier of the East India Company eloped with Elliot and after a long struggle, all the way to a special act of Parliament in London got married. This Napier has no relation to Lord Napier and Ettrick, Governor of Madras on whose remembrance is Napier’s bridge named.

Overall, I had so much to learn about great personalities who lived in this city that is my Home. Thanks, Sriram! 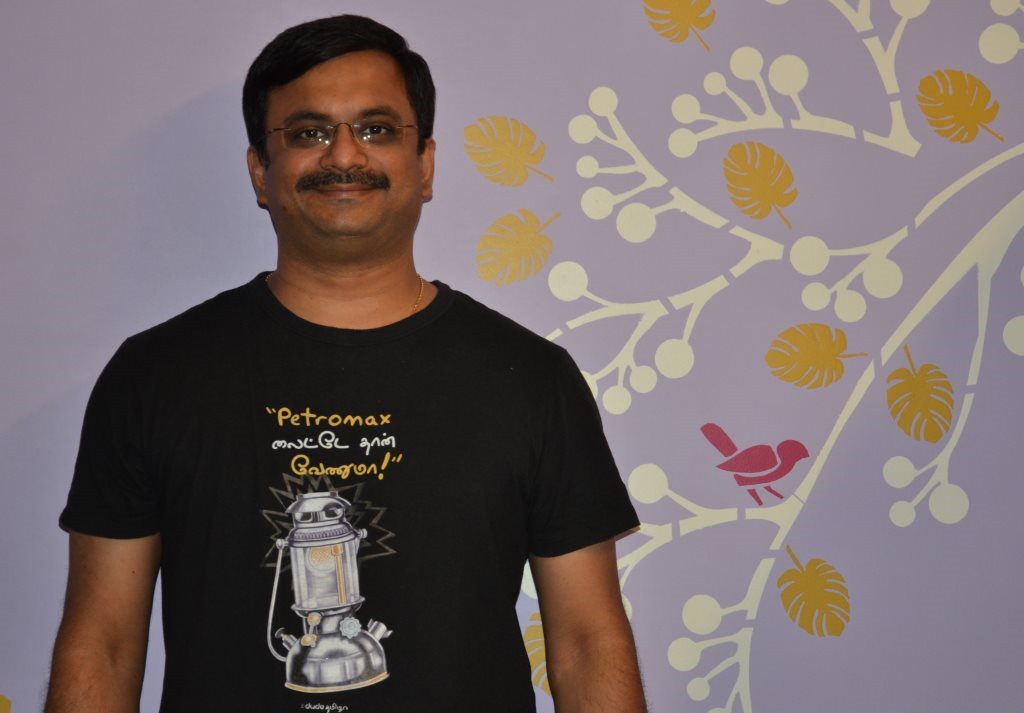 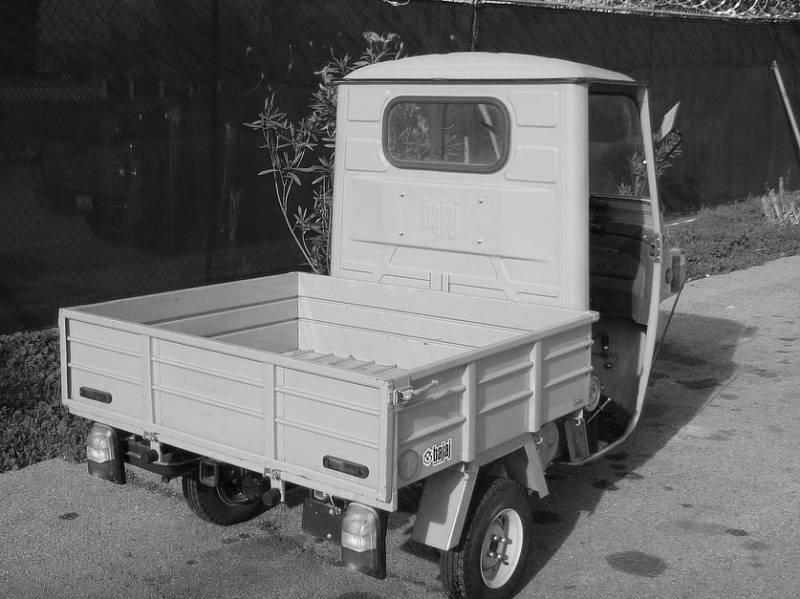