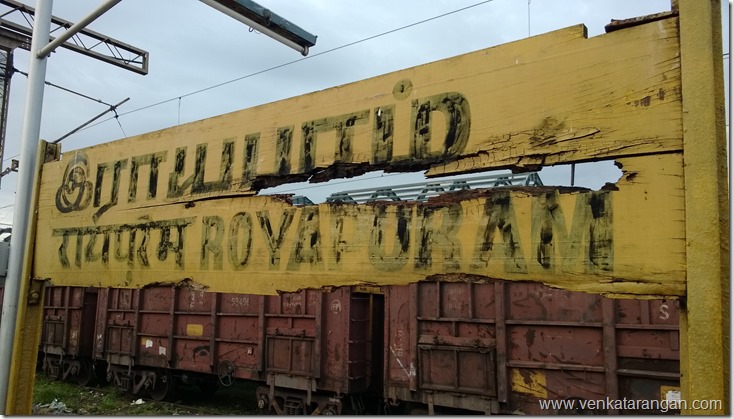 Following last year’s Chennai Heritage Walk on Old Madras Fort Wall by Mr.Sriram V, this year too I registered. Today the walk was on Royapuram area. I have crossed Royapuram area but never really seen the places there. After reading about Royapuram Railyway station being one of Indian subcontinent’s oldest surviving station I have been wanting to see it.

In today’s tour, as usual Sriram started on time at 6:10AM and we all boarded into vans which took us first to Royapuram Railway station. The railway station which is a significant historic monument is in deep neglected state and is in the risk of being demolished by Southern Railways (the owner of the land) for development of this area, no doubt this area needs development but not at the expense of throwing away a piece of India’s history. 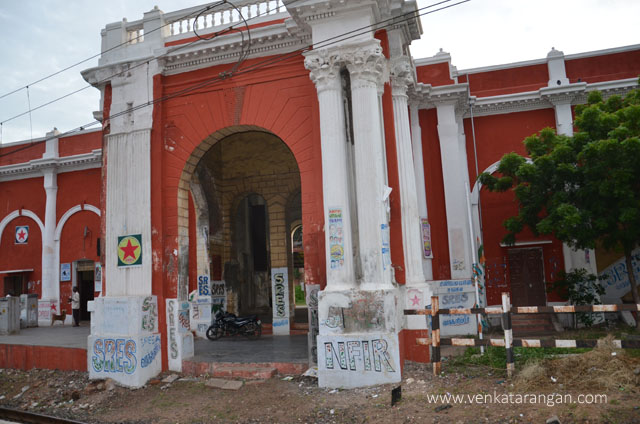 In early 1850s the Madras Railway Company (MRC) took up the task of laying railway lines to connect the east and west coasts of India. The arrival of six 13-tonne locomotives by ships from London was a sensation for people of Chennai and also an operations marvel as they had to be unloaded mid-sea into catamarans 2 mile away from shore as Chennai didn’t have a harbour at that time. Wikipedia lists the trains (wagons) were built by Simpsons and Company, but Sriram feels technology needed to cast the iron wheels were probably not present in India of that time.

The line was thrown open in 1856, and Royapuram remained in full glory till opening of Central station in 1873, then gradually losing its importance to Central and Egmore stations as decades went by. Royapuram retains the distinction of the first railway headquarters in India where Railway Employees stopped working in protest and went on a strike in 1913.

Seeing the depilated state of the station today it is difficult to imagine its glory days 137 years back, when in December 17, 1875 when the Prince of Wales, later Edward VII visited the place (which was converted as a theatre then).

Our next stop was St.Peters Church in West Mada Church Street which was built around 1799 by local residents. The area got its name Royapuram as St.Peter was referred in Tamil as “Rayappar’. In l799, Lord Edward Clive ordered the Sea Customer (Customs House) to move out of the Fort and ensure landings thereafter only on North Beach (about where the main harbour buildings are today), the boat-owners and their crews too had to move. They were granted 720 grounds in lieu of their land in Chepauk and they put down roots in what is now Royapuram on December 5, l799. Here they raised a church and the St.Peter’s Church of today was consecrated in l829.

Sriram also read a Tamil poem which described the full spelndour and glory of  the inauguration ceremony, the poem was from the book  “Tamilnadu payana katturaigal” by A.K.CHETTIAYAR. 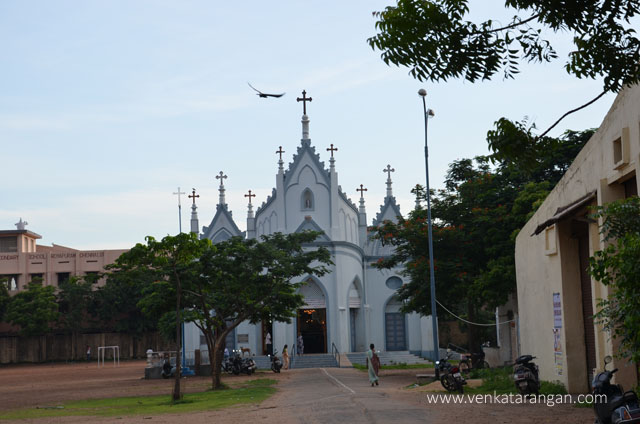 One of the participants in the walk who was from British High Commission,Chennai mentioned that the architecture of the church was a classic example of Strawberry hill gothic architecture. 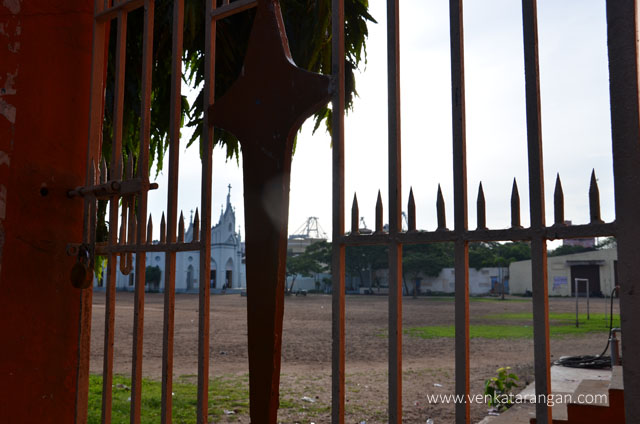 Near the church were Royapuram Oil tankers, Sriram recollected the stories of how one Mr.Haji Sir Ismail Sait brought Kerosene Oil to Chennai and how Emden the war ship from Germany bombed the oil tankers in 1914 and caused colossal damage.

Opposite to the church was a house belonging to Missionaries of Charity where Mother Terasa used to stay during her visits to the city. 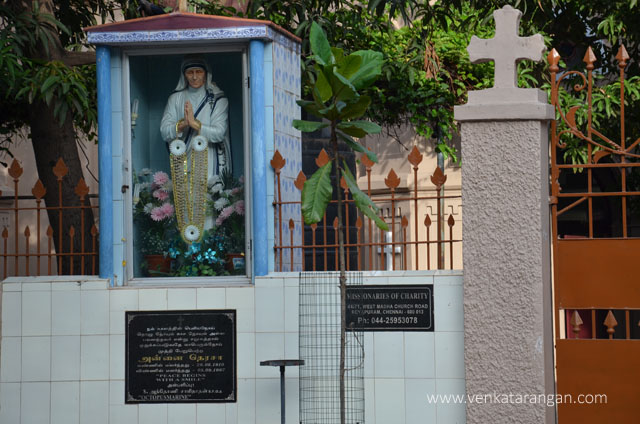 Next on the tour was two places of religious importance to local Parsi community. 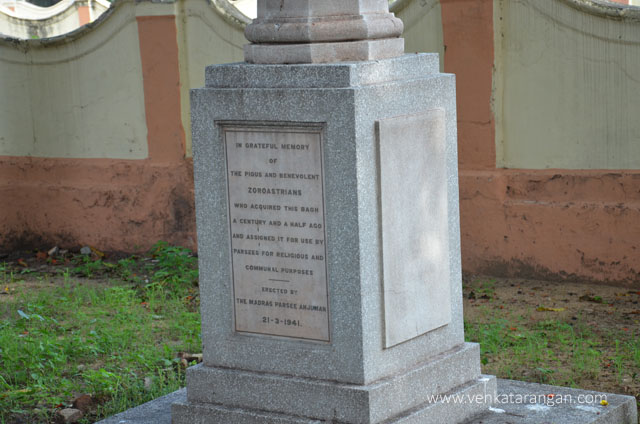 One was their cemetery (Parsi Anjuman Bagh) and the other was their Temple of Fire (Jal Phiroj Clubwala Dar-e-Meher). 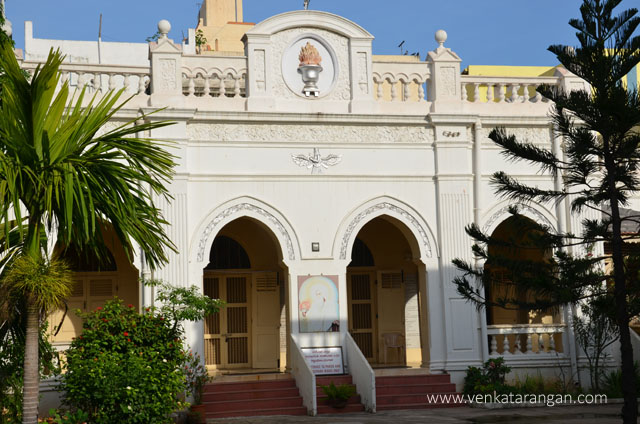 Sriram recounted various Parsis connection to the city. One was a shy Parsi girl, clutching a parasol and setting out for a walk. This was the scene in one of  Ravi Varma’s painting Going Out and the subject was Allamai (Aloo) Khareghat and the painting was donated to Government Museum (Egmore) in 1952. The second was about “Noraji” an officer in Kilpauk Water works to whom Madras owes its Water system. The third was Mary Clubwalla of Guild of Service.

Continuing on the tour we went to narrow streets of Pichandi lane near cemetery road to see the Shrine of Hazarath Sheik Gunangudi Masthan Sahib Dargah. Sriram mentioned that it is generally believed that Tondiarpet got its name from him but he was not convinced on that. The shrine contains the resting place of the Sufi saint and it has a small subterranean chamber used by the saint for his meditations, the chamber was 4 to 5 feet below ground level and the caretakers gracefully permitted us to go down into it and come up. The saint has the distinction of his days of visualizing almighty in a female gender on his singings and famous Tamil Poet Subramanya Bharatayiar is said to have got inspiration for his Kannama poems from these works. 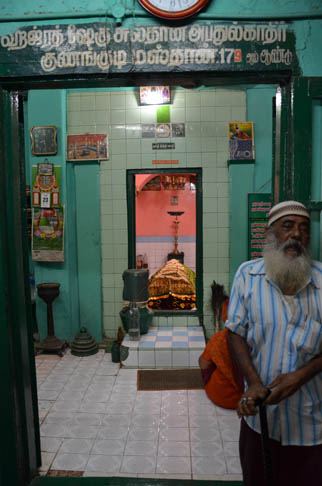 The last stop in the tour was the historic Robinson Park (now called Arignar Anna Park). It was here on 17 September 1949 in front of a huge crowd that  Former Tamil Nadu CM Thiru C.N.Annadurai along with other stalwarts founded DMK Party which changed Tamil Nadu State politics forever. 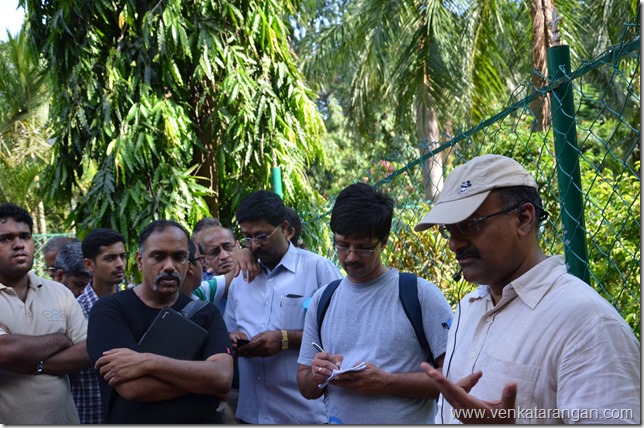 Sriram told the history were how the decorative street light posts (you could see some of the surviving light posts in this park) being installed by then Congress government was raised as an electoral issue by Thiru C.N.Annadurai. 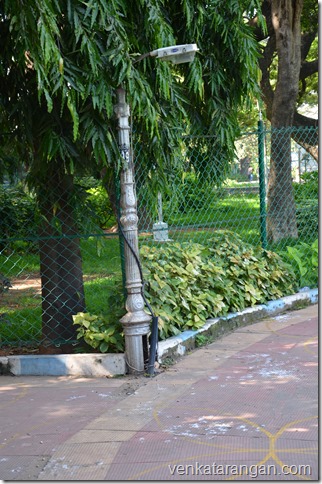 Opposite this park was Government RSRM (Raja Sir Ramasamy Mudaliar) Lying In Hospital, which is now managed by Stanley Medical College. 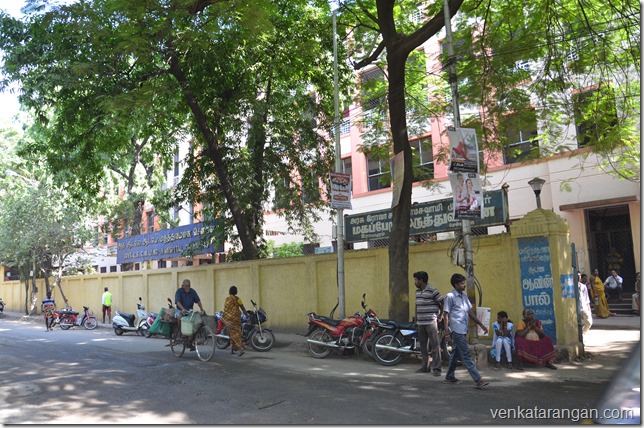 We ended the tour with a tasty “mini tiffin” breakfast at near-by Adyar Ananda Bhavan outlet.

All the photos I took today can be seen here in High Quality. 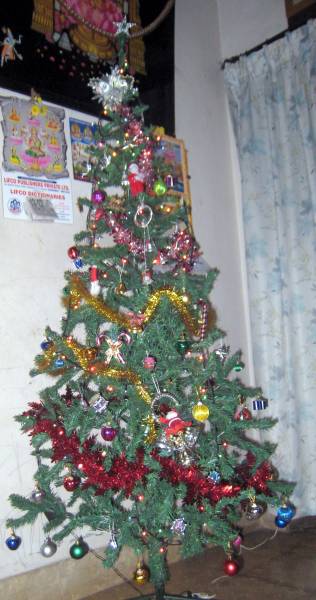 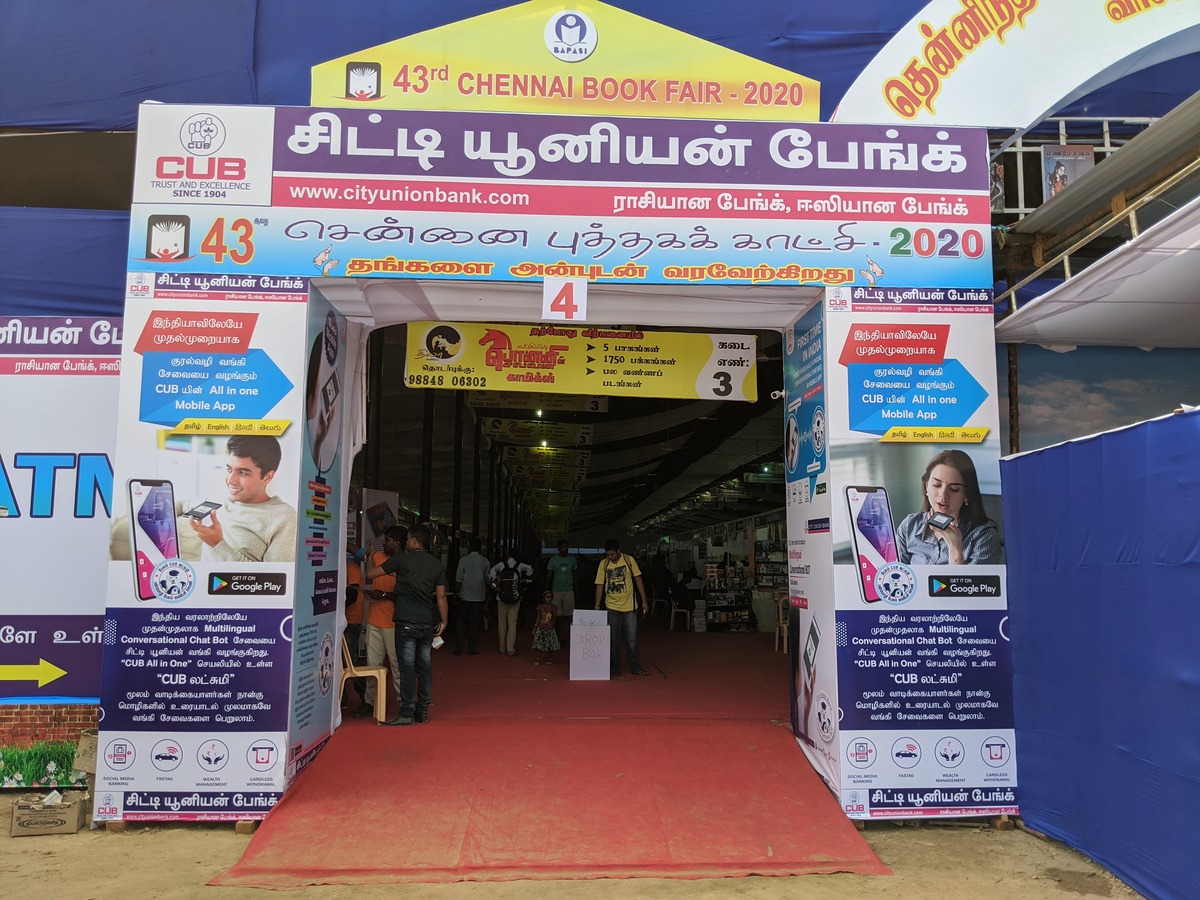 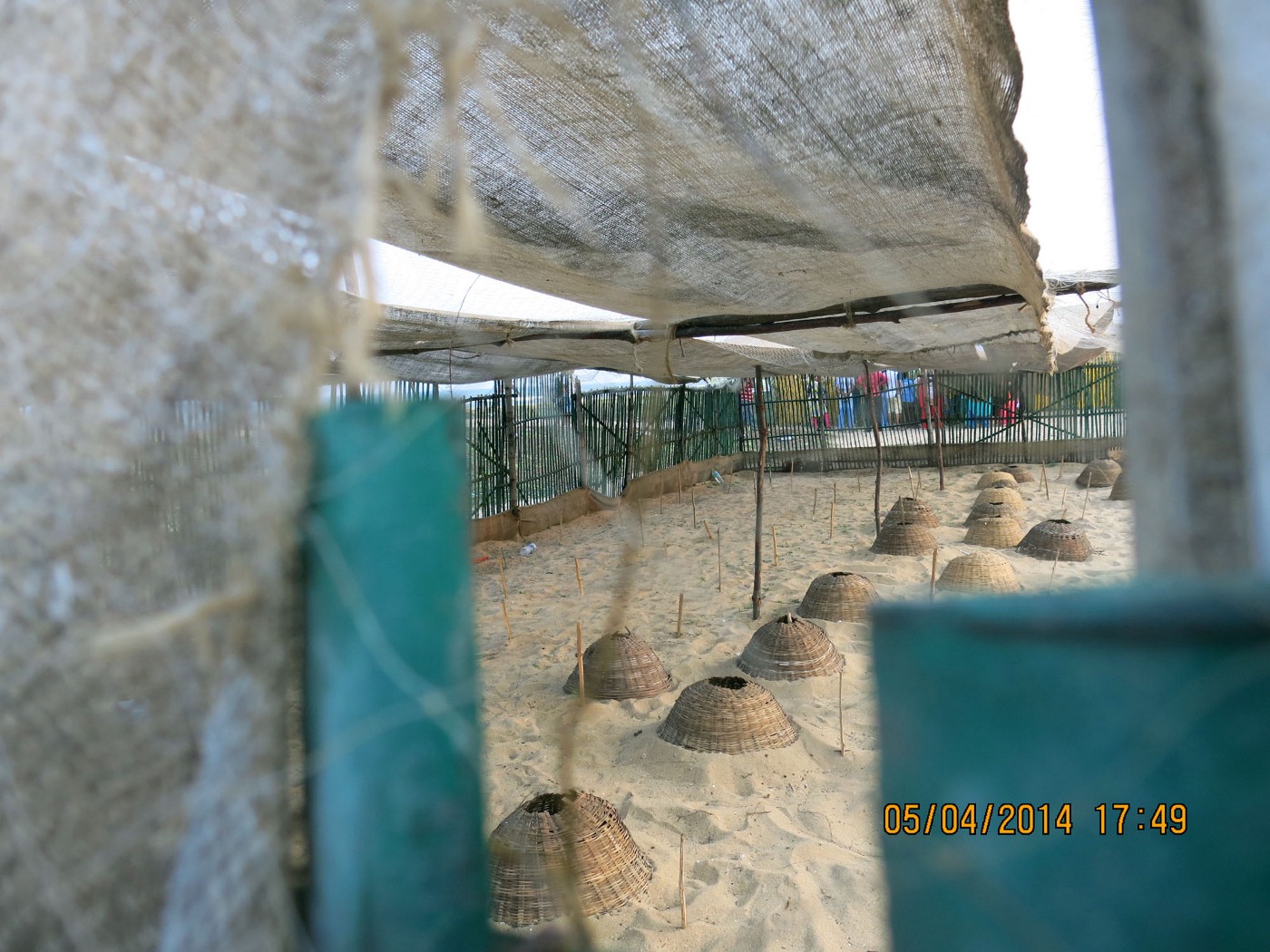