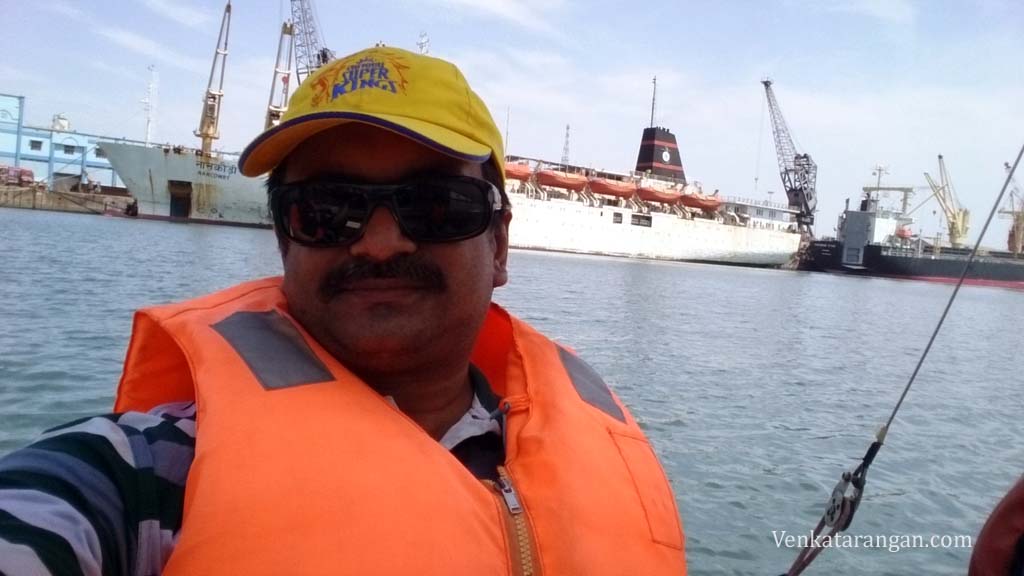 Madras week celebrations are under way and the city is gearing up to enter its 376th year; marking the day of August 22, 1639 when a small piece of land where Fort. St. George (Chennai) stands today was bought for the East India Company by it’s officers  Francis Day and Andrew Cogan.

Today I went for a Heritage walk cum sail to “Chennai Port Trust” organized by Royal Madras Yacht Club along with Chennai’s favourite historian Mr.Sriram V. I registered few weeks in advance for the walk, breakfast and sailing for Rs.850 per person. We were instructed to assemble at 6AM in front of Reserve Bank of India (RBI) Chennai office, opposite to Chennai Port Trust Office. I had to literally drag myself from bed to reach on time, but the registration and name tag distribution process was poorly organized that we wasted over 30 minutes standing in a line, even after which half of us not getting our tags. RBI building in Chennai is a majestic one with a big tiger seal in its facade, while waiting in the queue when I pointed my camera to take a good early morning snap of it, the security guards instructed us not to. Only in India you have this strange notion of security, I fail to understand how taking pictures of a building facade can be harmful, feels more strange when you compare this to USA where you can now take photographs during your tour of White House.

The first stop in the walk was Chennai Port Trust’s office itself. Sriram V went back in his narration to the origins of how the port in Madras came into existence. The area around the port trust office, where Evening Bazaar is today was called in early 19th century as Thieving Bazaar, pickpockets would have been plenty here to take advantage of the crowd visiting George town.

Till late 18th Century offloading goods from sea to Madras shore was difficult, Chennai’s natural harbour was shallow for big ships to dock, making ships anchor few kilometers offshore, goods then transported to shore by masula boats (padagu) and catamarans. The catamaran operators were a law onto themselves demanding huge money to get the job done, just like the Autodrivers who ply Chennai city roads today.  Around 1770 during the time Warren Hastings was in Madras a suggestion to build a 1750 feet pier came up, it was not pursued after Hastings went to Calcutta. Then a proposal for £400,000 was put forward to build a pier for 1350 feet, but no investor came forward to fund it as British India already had 3 large ports – Bombay, Calcutta and Colombo.  Madras was almost a forgotten place once Calcutta became the seat of power and Bombay flourished as the commercial hub; letters from London to Madras would take 10 to 14 weeks to get delivered, most often they would be lost for good. All this changed with 1857 Sepoy Mutiny when the British Government decided to change the harbour situation in Madras for defence reasons. William Parker was the one who designed the first Pier in Madras which was 1000 feet. It was a steel structure without any protection, in 1873 the pier was destroyed by a french ship.  In 1875, then Prince of Wales Edward VII laid the foundation stone for a new port and work started soon. Edward VII was a man with many mistresses and a reputation as a playboy, as the future king he was received with honours during his tour of Srirangam temple in the same year.

Soon the harbour came about in its own right, it kept growing, the custom office was moved to where First Lane Beach road is today. Madras (Chennai) Port Trust Office we were in was famous for another reason, it was here Mathematical Genius Srinivasa Ramanujan worked as a clerk from 1912 to 1914 under Sir Francis Spring’s chairmanship, Spring is remembered even today for promoting and helping Ramanujan to get recognised. Port trust has immortalized Ramanujan by having his statue installed inside it’s premises. Once Ramanujan returned to India after his studies in London, Government of Madras paid him Rs.75/Month as stipend to further his research, a local industrialist by name Numperumal Chetty who had nearly 99 houses in the area around Harrington Road hosted Ramanujan in one of his houses as his guest.

The oldest light house in Madras today is inside the Madras High court premises. The present day Light House near Marina beach is a recent addition to the city’s shore. 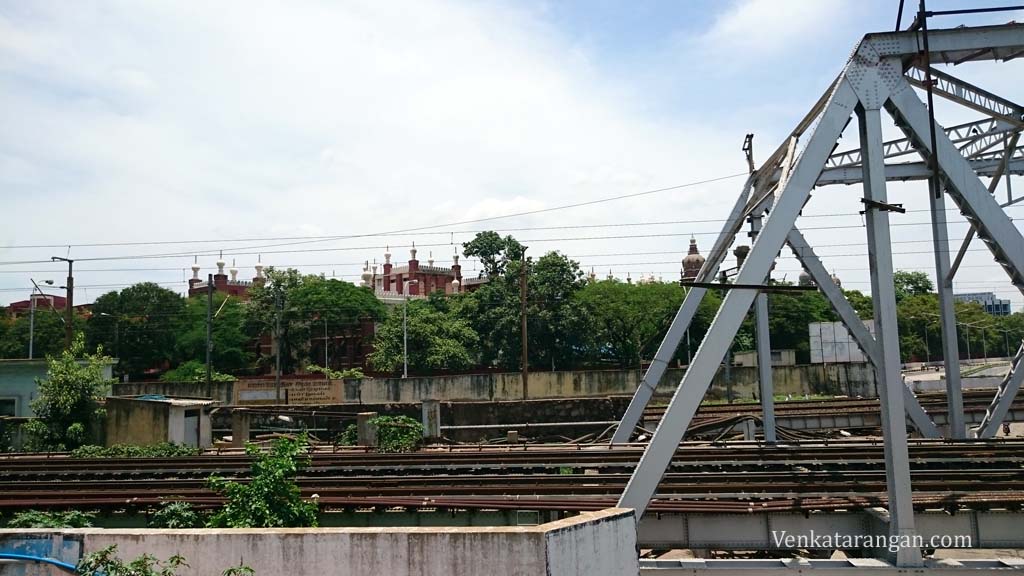 The next stop in our walk was Spring Haven Road leading to the gates of the port. All participants of the walk had to show our government issued ID cards like Aadhar before we were allowed inside. On the way to the gates you can see the house of current Chairman of the port trust, where likely Sir Spring would’ve lived, the area is now cleaner but in 20th century the place would have been filled with  coal dust all around. Sriram led us to lawns of one of the bungalows, which should been build 50 years before the Art Deco style, one other building from the same era will be the Parry company building opposite to Madras High Court. 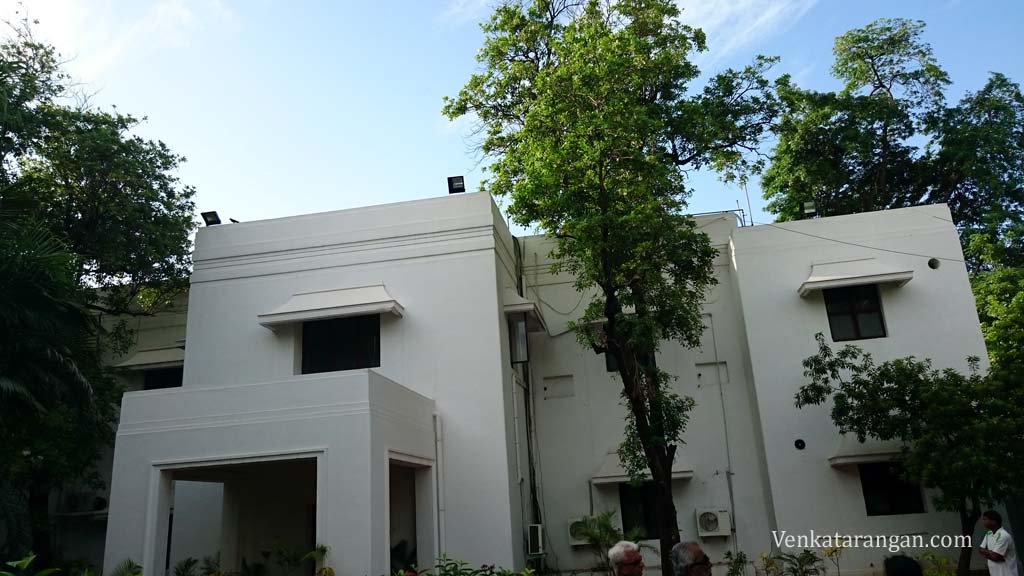 On the way to the port gates you can see a railway line, that was started in 1880 as Madras Harbour Railways which is one of the shortest railway line in India, about 50 kilometres line run inside the harbour premises and another 17 kilometres outside.

Entering the port, we saw an old brick structure that is currently the electricity sub-station, in olden days it should’ve been one of the warehouses. Looking to west from there, in what’s first lane beach road today you would’ve seen in 19th century and early 20th century business houses that were connected to imports and exports, banks and financial houses. 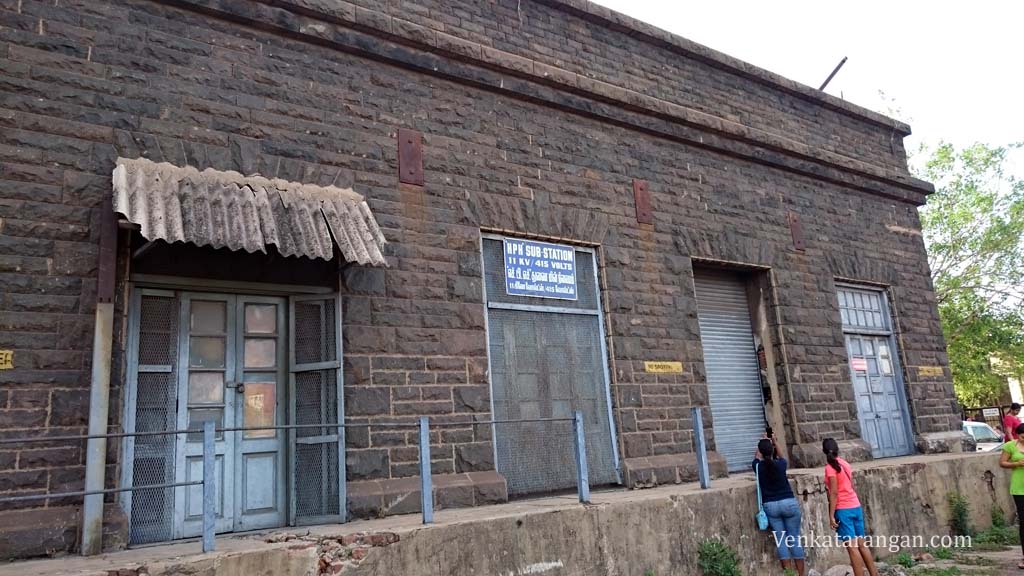 Coming back to the construction of Madras harbour, it is likely to have been a tough challenge against nature for the British Engineers. The Harbour itself was nicknamed as Boiling Teapot by seamen of those days. From 1905 to 1919, harbour was expanded vastly under the stewardship of  Sir Francis Spring. In 1919 expansions were paid by taking a loan from Government which was repaid in 1952 by the port. Being an artificial harbour, the port was vulnerable to accretion of sand inside the basin due to underwater currents. The city gave Eighty acres to Port Trust as most of it was sea before the sand got deposited. Sir Francis Spring constructed separate area for iron ore, coal, etc., making it one of the smoothest operations in the world. Spring assumed charge as the chief engineer of the port in 1906, drew a long-term plan in a scientific manner to overcome challenges, one of his design was the shifting of the entrance of the port from eastern side to the northeastern side protecting the port from sand currents. Springs estimation on the traffic that the port could handle in the next 50 years turned out to be accurate, he had predicted that by 1970 the city will need another port, today Ennore Port opened in 2001 serves that purpose with handling all the coal moving the black dust from Chennai Port. 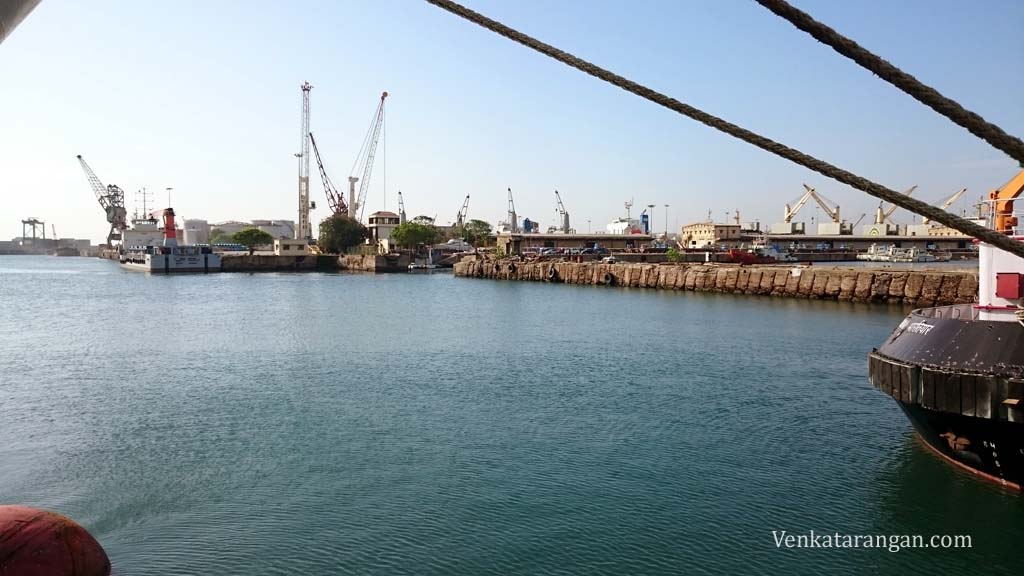 When we were near the Passenger terminal, we saw a ship Nancowry that was docked there.

During First World War Madras Harbour was one of the safest for the British Empire, with only one German Ship SMS Emden dropping bombs over Oil Tanks and ships in Madras shore. The incident has left a mark in the Tamil culture by giving the name “Emden” to symbolise a tough/rough guy, even a movie Emmtan Magan (2006) was released by that name. Oil was one of the biggest imports in the Harbour, Kerosene was the fuel of choice for the masses, to avoid spurious oil, imported Kerosene was mixed with chemicals that made the oil blue in colour giving it the name “Krishnoil” (Lord Krishna being blue in colour). 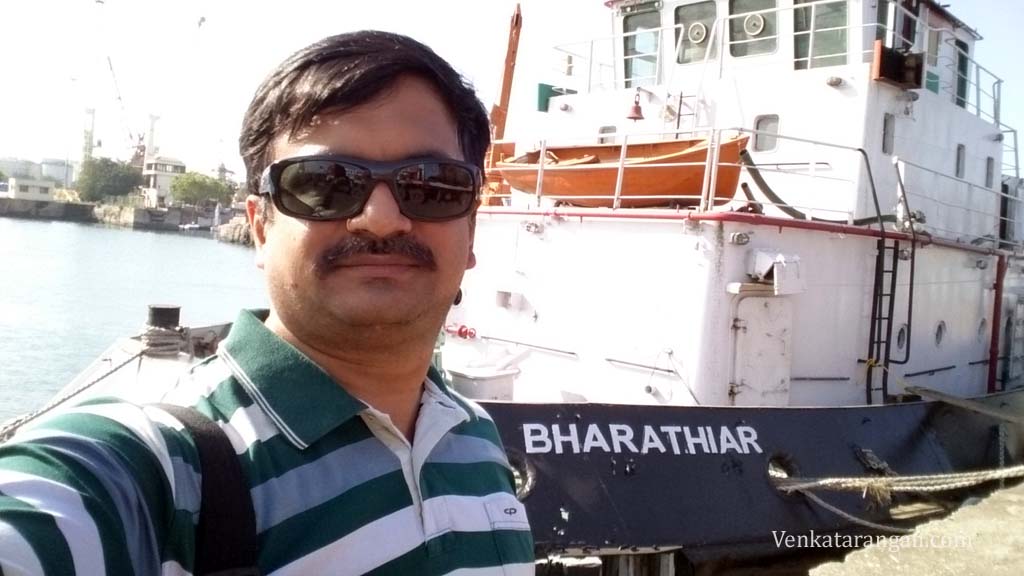 Our next stop was Royal Madras Yacht Club,  it’s the first sailing club in South of India and was founded by Sir Francis Spring in 1911. Today the club is located at Springhaven Wharf, named after its founder. 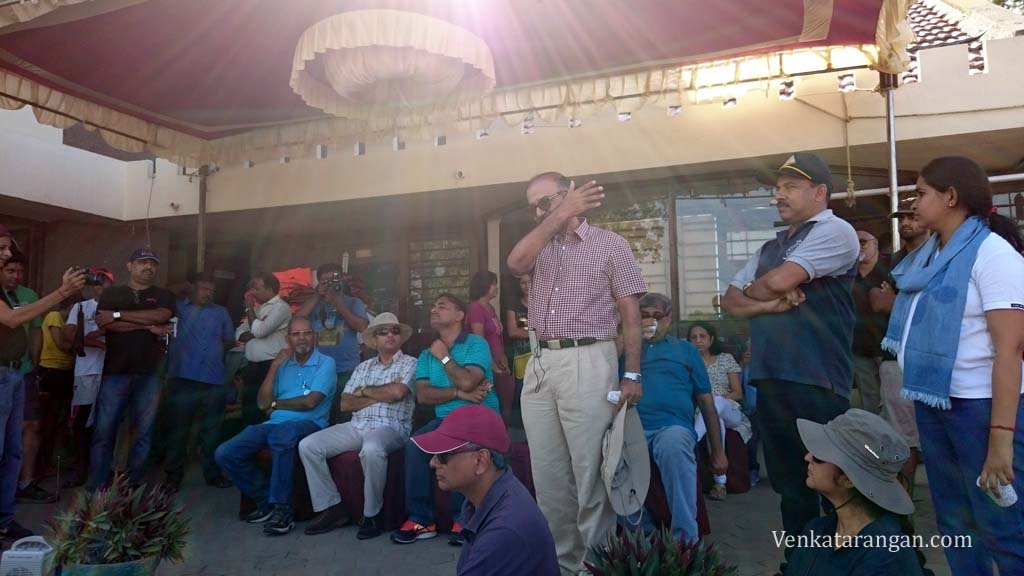 After the breakfast there was a valedictory function chaired by Tamil Nadu Tourism Department (TTDC) Chairman who talked of the 1000 year maritime history that Tamil Nadu coastline boasts of. After the function, we were taken in batches in sail boat into the sea. It was a magical experience for me to see my city’s coast line from the sea. We were taken about 30 minutes into the waters near a sunken ship, the harbour was busy with Navy and Cargo ships plying around. We were lucky as the boat (seabird) we went was sailed by two experienced members of the club, who were tremendously informative. 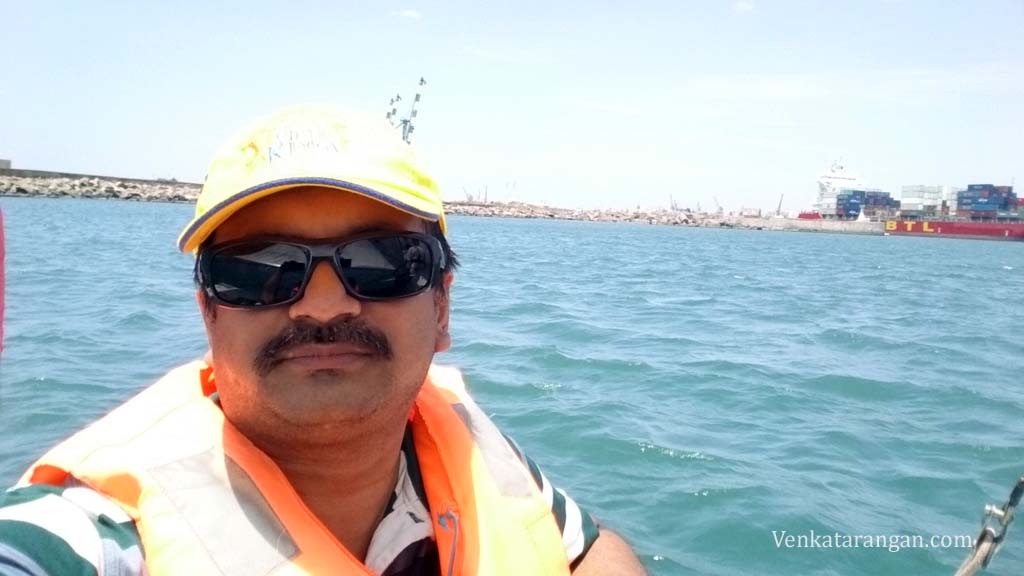 We came back to shore after nearly one hour on water, it was mid-day, the sun was shining hot, we thanked the organizers   and came to our car headed back home after a memorable morning. 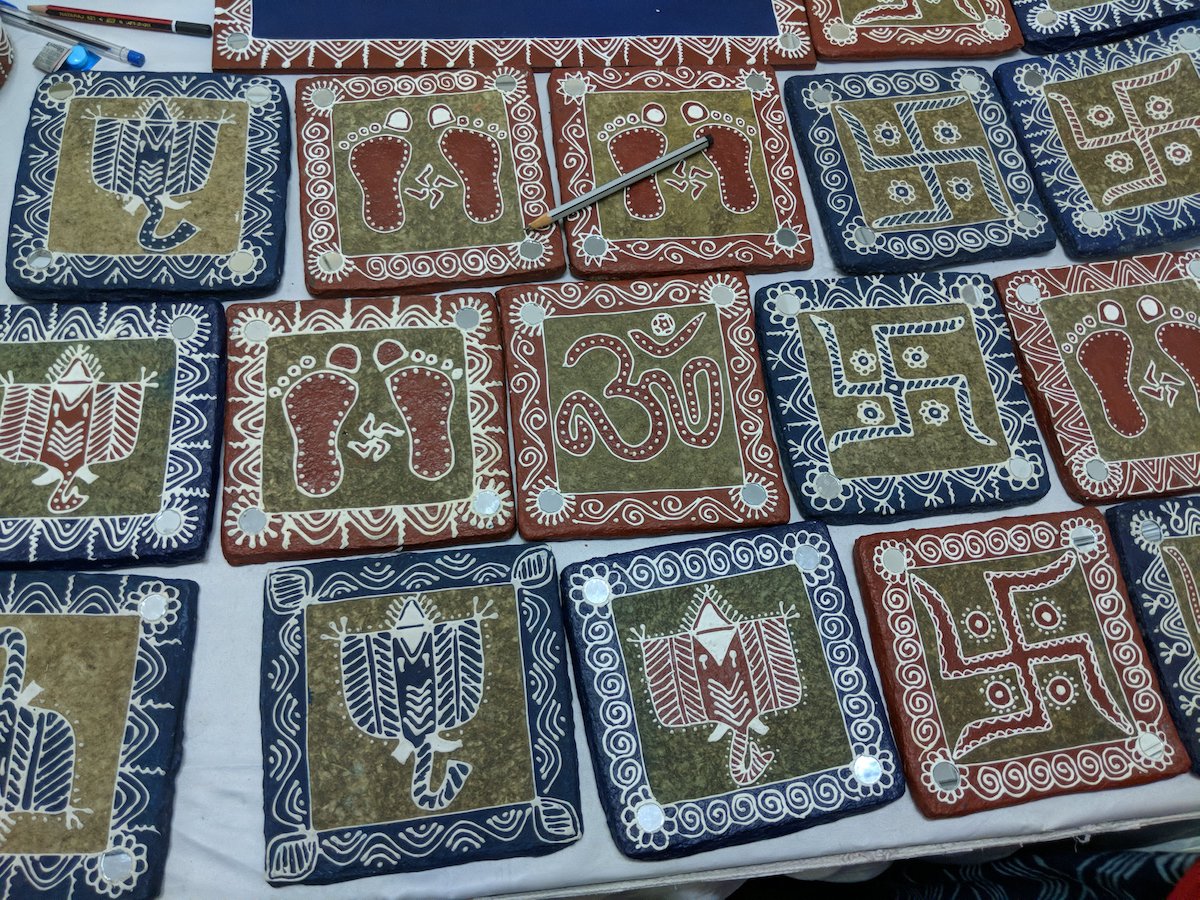 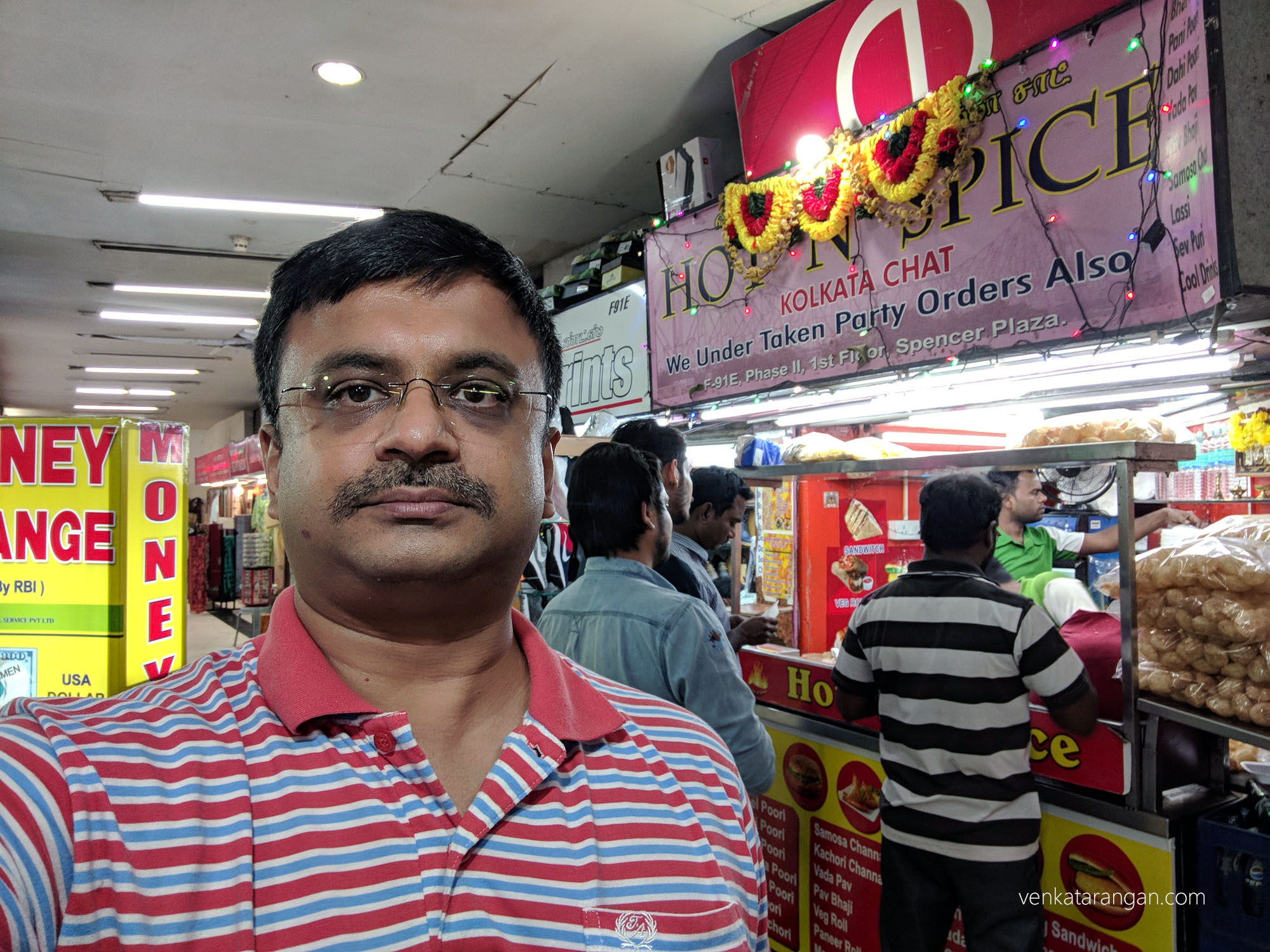