In my main PC at work where I store most of my documents and data, I have been using Hardware RAID for mirroring between two 500GB Seagate Hard drives for last 3 years. This provides me with automatic redundancy and minor performance benefit while reading large video files. All was well till last week, when on boot BIOS warned that the Mirror is broken. Having seen this happen few times before I quickly updated my backup to external drive and then rebuild the mirror. Yesterday I got into the same problem, I decided and moved to Windows (Software) mirroring. Today afternoon Windows 7 showed me the below dialog and warned me that S.M.A.R.T. data is indicating an impending failure/error in one of the drives. The warning was just about useless beyond that – no indication on which Physical drive is having the problem. 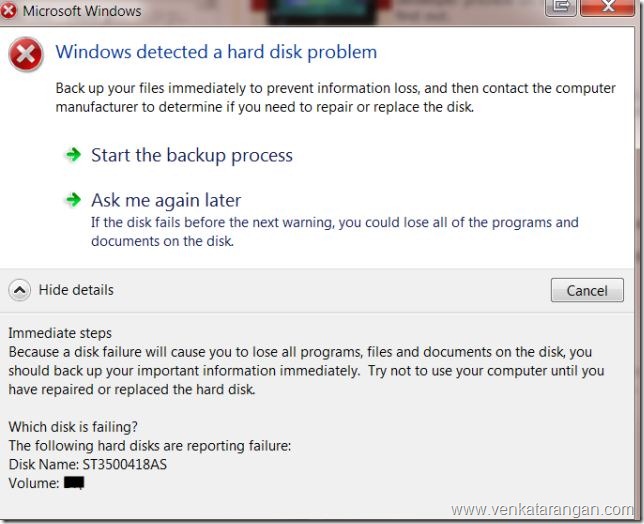 On searching for this issue in Bing!, I found this free utility called DiskCheckup which can read the S.M.A.R.T data and provide more information, which it did. I found one of the drives was having high “reallocated sector count” which was told me by few hardware blogs to be bad. But since both my physical drives were the same model their class names displayed were same, which didn’t help me in isolating the failed one. So I went to computer management and broke the mirror. Reran Diskcheckup few times (disabling one drive after another in Device Management) and identified the failed one. Since I didn’t have a spare 500GB to replace, I fixed a 1TB drive in place of the failed one. Fortunately Windows 7 didn’t mind setting up mirroring between two drives of unequal size. I managed to select the 500GB, Add Mirror to a portion (which Windows created automatically) of 1TB and setup everything, the balance space I could create another simple volume. Windows is currently Resyncing the mirror between the drives. 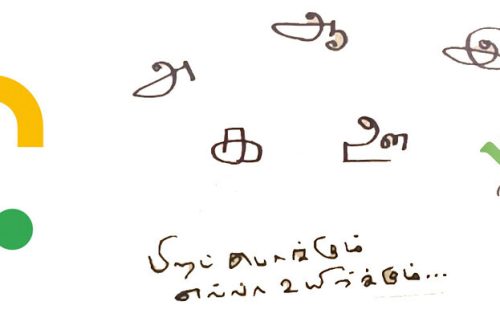 How to read a handwritten grocery bill in Tamil?