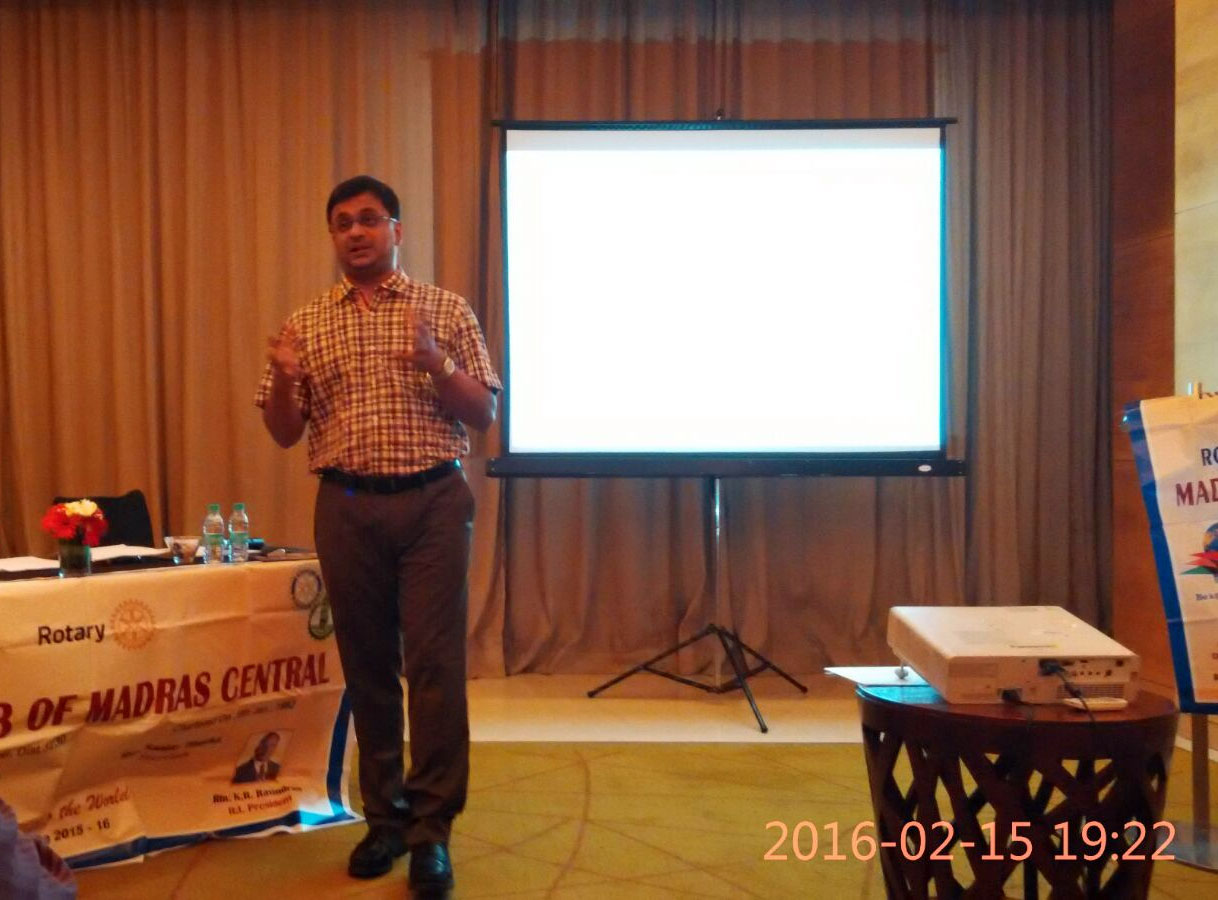 I was invited by the office bearers of Rotary Club of Madras Central to deliver a talk today in Hyatt Regency on the topic of “Net Neutrality”. This has been a hot topic highlighted in media and discussed in social media due to TRAI (Indian Telecom Regulator) recently asking for comment following outcry over Airtel Zero rating plan and Facebook’s Free Basics (earlier called as Internet.ORG).

The audience I was addressing had come from various industry backgrounds, technical and non technical, so I started with a brief introduction on Internet, the economics at work in data business before proceeding with the core topic and my views on the same. In today’s world every business however small or big, whichever geography, whatever was the nature of it’s services is affected by Internet in some form. For example, a heavy truck fleet owner may use Internet for monitoring the fleet movement and performances using IoT devices that’s put up in every truck. Media was the one of the earliest industry to get disrupted by Internet. Those who ignore Internet do it on their own peril.

Starting on the basics, I covered on the centrality of Internet – it’s a network of networks with no centralized governance, important pieces of it are being maintained by organizations including ICANN (Internet Corporation for Assigned Names and Numbers) and Core protocols by IETF (Internet Engineering Task Force).  They are supported by other technical international & national organizations like Unicode, ISO,  ITU, IEEE (802.11/Ethernet/WIFI), NIXI & APNIC to provide additional services all working seamlessly to realize the potential of a connected world. To complete the picture, I touched on other side of the coin – explaining briefly about Dark Web and the TOR (The Onion Router) Network.

Then I explained the difference between Bandwidth and Data Transfer both of which are not understood by many, thanks to our TELCOs who wish to keep it confusing. In simplest terms they are:

Bandwidth is the “speed” available for use / maximum throughput

In my city (Chennai) the highest monthly broadband plan that’s available for consumers cost typically Rs.2000. For that price Airtel offers 16Mbps Bandwidth (Speed) and 50GB Data Transfer (Quota) per month. ACT offers 100Mbps Bandwidth and 200GB Data Transfer. While the second is a better deal (I use the same in my house), you need to understand Airtel offers a Voice landline included in the price and is expected to offer better reliability because of their Network composition. At the supply side for the backbone of data for ISPs (Internet Service Providers), prices have been coming down dramatically. In India, NiXi (the Data Exchange Network where ISPs interchange packets without going outside the country) prices have fallen from Rs.12 per GB in 2012 to Rs.5 in 2014 and expected to fall more. In USA which is indicative of Global data, prices have fallen from $800 per Mbps in 1999 to $0.63 in 2015. You need to understand that data is not a free resource, but is not expensive or scarce either, it’s available in plenty and costs very less. 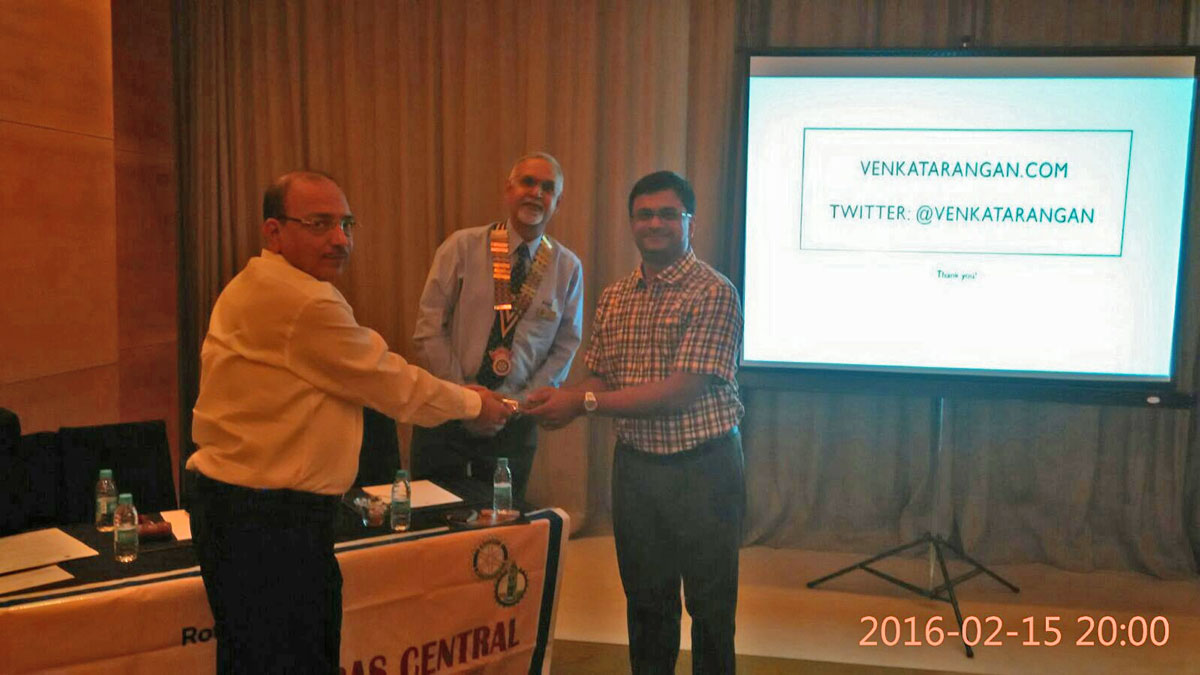 What is Net Neutrality, it’s just a term, an idea. It’s not defined by any technical organization or by any statute.

A term that says Internet Service Providers & Regulators should treat all data on the Internet equally, not discriminating or charging differentially by user, content, site, platform, application, type of devices connected and purpose of usage.

There are many analogies floating around which try to explain Net Neutrality – Highways and Car Pool/Speed lanes, showcasing inequality and others. I had to caution the audience not to take the analogies literally, they only tell part of the story.

The timing for the talk today was apt with TRAI releasing their guidelines for differential pricing on 8th February 2016 which states 3 main points.

1.No service provider can offer or charge discriminatory tariffs for data services on the basis of content.

2.Reduced tariff for accessing or providing emergency services, or at times of public emergency has been permitted.

My view on Net Neutrality is that there can be no black ‘n’ white decision either in favour or against it. On the face of it, Net Neutrality is a fair policy that aims to treat everyone equally, certainly a lofty goal worth demanding for. My complaint is on the hype surrounding it’s virtues. Somehow media and activists who campaigned have made Net Neutrality as the only issue and overblown the fear in mind of users on the dangers if we don’t fight for it. In a country like India we are used to speed lanes every where – whether it’s the paid queues for Temple darshan or passport issue/railway ticket Tatkal schemes. You need to provide speed lanes, what’s important is that the speed lanes are not misused or exploited for illegal gains or anyone being denied services otherwise.

I believe in freedom & individual choice which are founding pillars of any democratic country including the India I am proud of. ISPs or Government have no business to control/constraint what I can download (say a Torrent) or where I download/upload it from. For handling piracy there are established copyright laws in place that can be used, other than the blanket take down requests for entire Google.com or Github.com services that are often requested from Hon’ble courts.  I share the view with Internet activists that TELCOs around the world charge more and offer poor service than what the customers deserve, at the same time we can’t be vilifying them unfairly. With Facebook Free Basics in particular I don’t see it being anything more than a free sample given in supermarkets or the trial subscriptions we all love getting, I do think Facebook made a mistake in initially calling it Internet.ORG as if to indicate it’s something like Internet lite. We need to give credit to today’s consumers especially the poor in India, they are extremely smart, shrewd enough to wriggle out few paisa savings in the calls they make by using dual SIM cards, a concept that the Indian PrePaid consumers demanded and got it, not due to any regulations or TELCO’s marketing geniusness.

I am against defining new laws or regulations to ensure Net Neutrality –   where do you define the boundaries, is it between the transaction of a consumer with his/her ISP or between ISPs or between the backhaul traffic providers?.  The technical backbones have to handle various conditions and can’t be meeting the equality goal everywhere. I can understand why there has to be flexibility given to ISPs to prioritize some traffic over others on valid reasons (like VoLTE or Messaging or IoTs over say Video) like when available spectrum/signal like physical constraints exists. If an ISP misuses this discretion power then the wallets of the consumer has to speak, more on this later.

As a consumer your experience of browsing the web is smooth due to many technical tricks deployed in network management including what’s called as Peering, a concept that is as old as the Internet. Peering is the direct connection that’s done between ISPs or between a ISP and extremely popular service like Netflix or YouTube or with CDNs (Content Delivery Networks) like Akamai or Amazon Cloudfront that cache content closer to a consumer to speed things up. If you prevent this, then your YouTube watching experience is going to be bad, do we want that?.  Here the authorities have to ensure no unfair trade practices or cartels are formed illegally, other than that stay away.

I believe there can be no silver bullet in going just for Net Neutrality but for a complete framework that guarantees a fair and free data/internet service for us and future generations. For that to happen, we should be asking for the following:

If you are interested you can read this article by Wireless Watch here that I read today on this same topic. 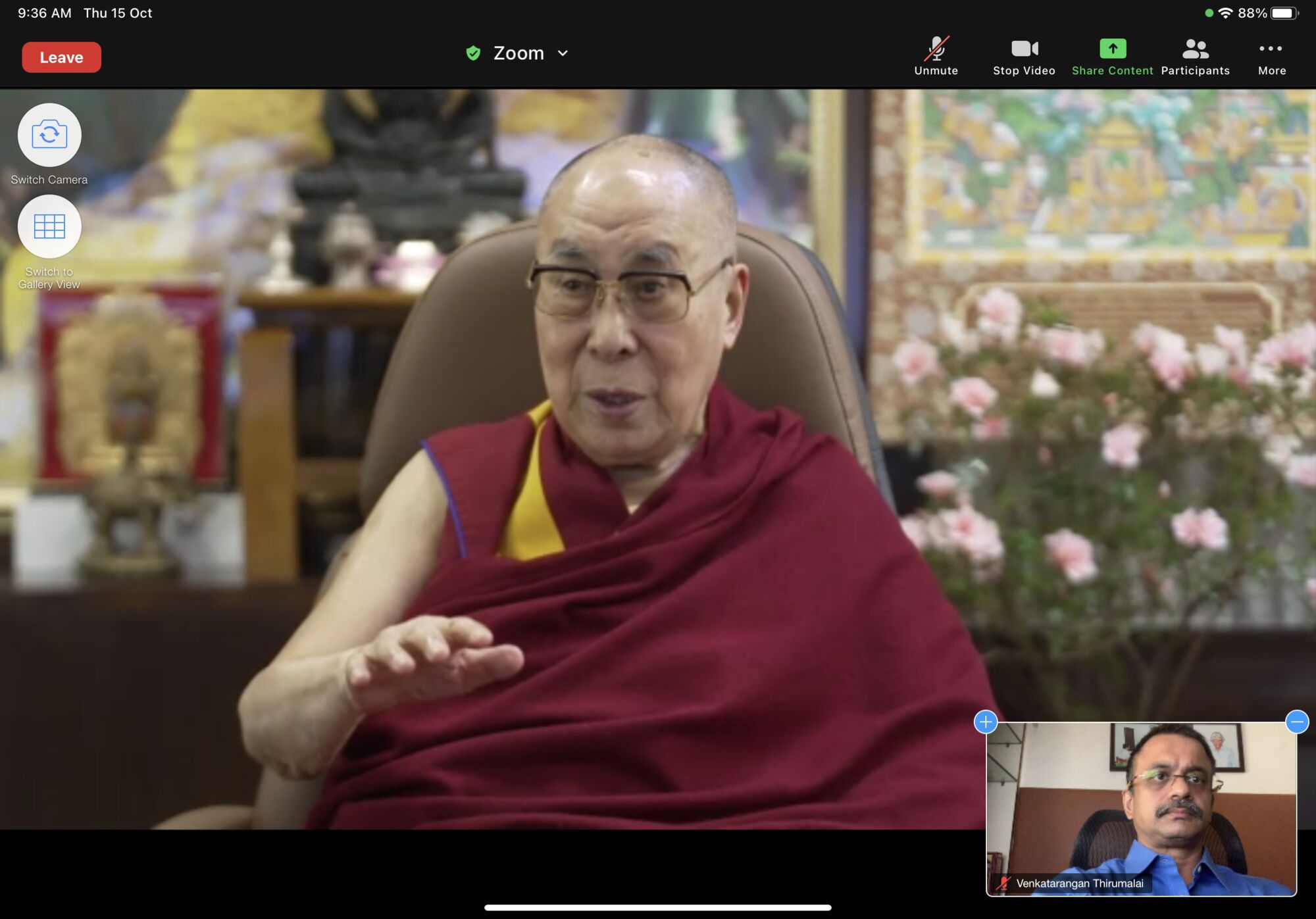 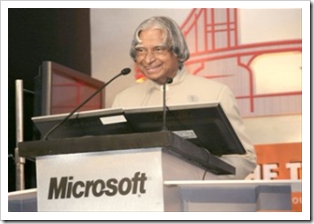 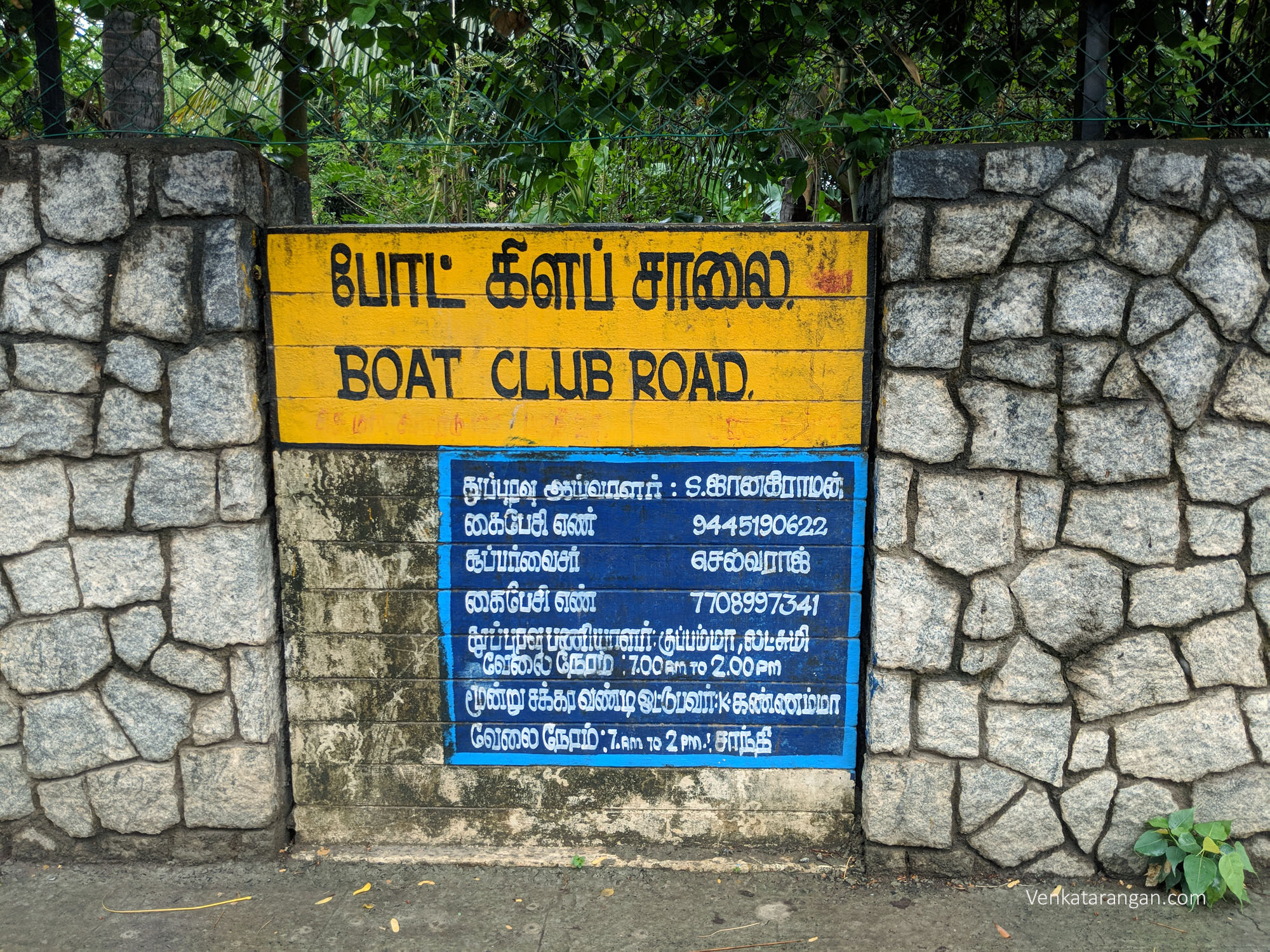