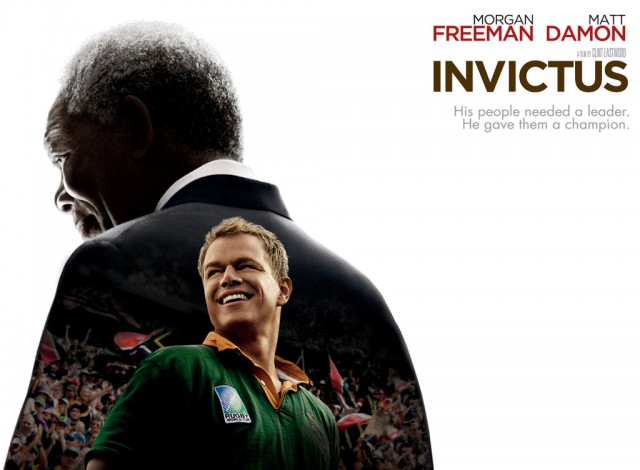 Amongst the world leaders who have lived during our lifetime, Mr.Nelson Mandela stands tall. I have great admiration for him, not only for his freedom struggle (27 years in Jail) which is  legendary, but for what he did after being elected as South Africa’s first black President. He united a country divided by centuries old racial divisions and stepped down gracefully after a single term when he could have easily held on to power for life.

Invictus (2009) is a movie that portrays about one of the tools (1995 Rugby World Cup) Mr.Mandela used to heal a racially wounded populace.  And that’s the reason I have been wanting to watch this movie. Both the main actors – Morgan Freeman and Matt Damon carry the baggage of their past successful characters, which is a real burden  when playing a real world character like Mr.Mandela who we all have seen in Televisions. Both have done their best in clearing their own image and portraying the characters they are tasked with.

A powerful story like this could have been told from any of the different characters point of view, I liked Director Clint Eastwood’s way of telling it from the President’s personal guards’ perspective. In a subtle way it reinforces what Nelson Mandela stood for, it was to “protect” the voiceless and respecting the law of land which was equal for all. For Mr.Mandela it was never about ONE, it was always ALL. There are numerous  instances of brilliance and outstanding leadership exhibited in the movie. Whether it was the act of Mr.Mandela writing a letter to the captain of nearly all-white Rugby team (Springboks), Risking his decades earned political capital for protecting a “White” name for the team, sending the team players to coach poor black kids in country side and so on.

This movie and the story behind it can be a great asset in any leader’s library, whether its a business leader or a political leader.