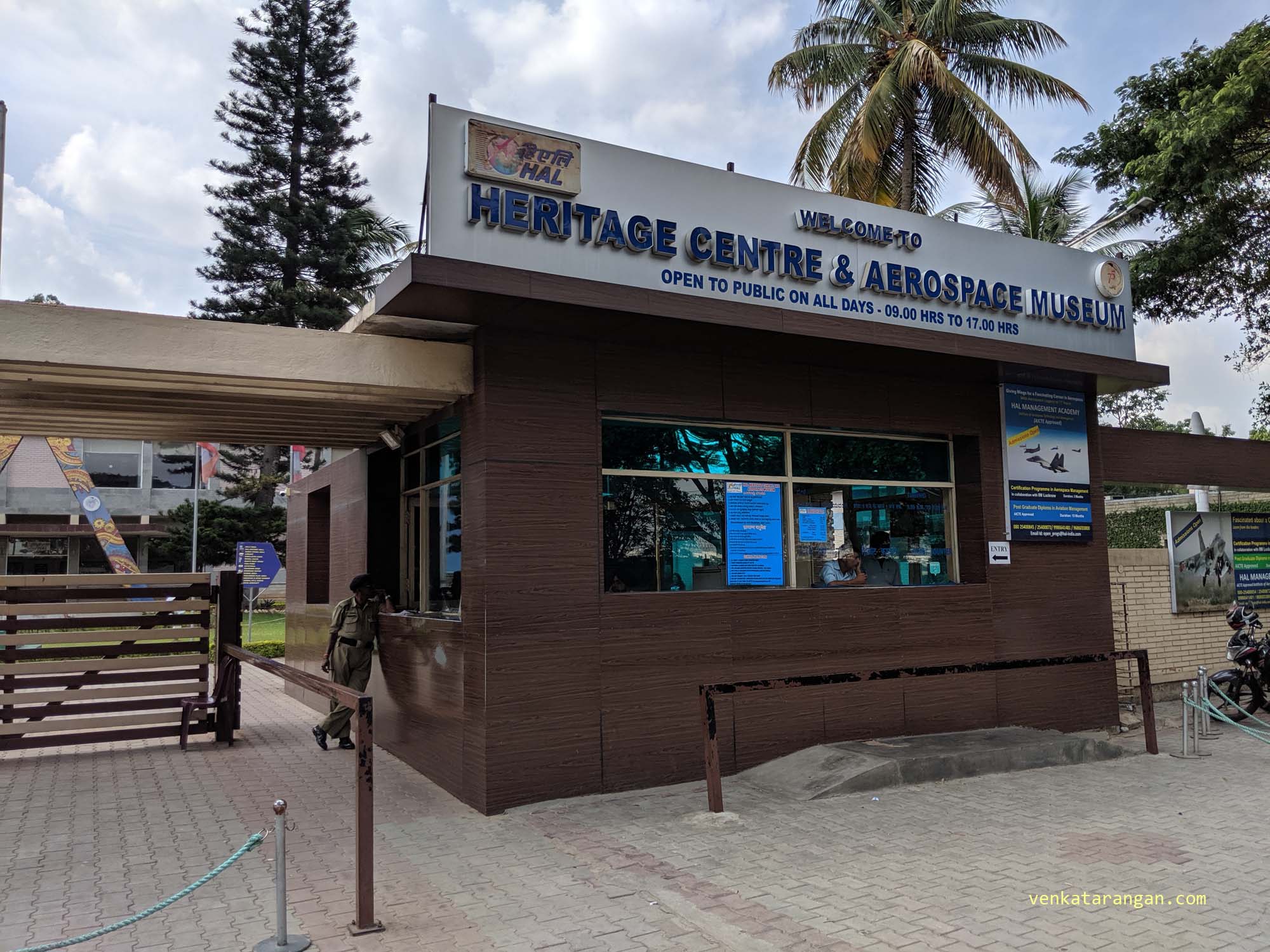 In the last two decades, many a time especially when the old HAL airport in Bangalore was in use I  have seen this museum, but never went inside. Probably, because the younger me was busy working and had little interest outside software? Nowadays, without any hesitation to spend time, I seem to drop into many of the tourist places.

Only today, on the way back after my day meetings, I stopped in front of this museum and went in. The security guard stopped and pointed me to the ticket counter. I bought an entry ticket for Rs.50 (US 70 cents) and a separate one at Rs.20 for my smartphone camera.

Heritage Centre and Aerospace Museum, established in 2001, to showcase the growth of the Indian aviation industry and HAL for six decades. The museum houses displays of various aircraft and helicopters, Aircraft engine models, Flight simulators, a mock Air Traffic Control Tower and an exhibit of Indian aviation history.

//There are two halls, one displaying the photographs of the growth of aviation in each decade from 1940 till date and a Hall of Fame which takes the visitors through the Heritage of Aerospace & Aviation Industry in India. The second Hall highlights the various functions of an Aero Engine by displaying motorized cross sections of various models of Aero Engines. Real Engines such as Garret (for Dornier Aircraft), Adour (for Jaguar Aircraft) and Orpheus (for Kiran Aircraft) can be seen here along with Ejection Seat with Parachute; and Pushpak & Basant Aircraft. The outdoor garden has displays of aircraft and fighter jets such as MARUT, MIG-21, HT-2, KIRAN, CANBERRA, AJEET, LAKSHYA (Pilotless Target Aircraft) & many more.//

I was able to spend about 20-30 minutes going through the exhibits, I found it to be okay. It could’ve been more engaging, I saw nothing that was interactive – to be fair, I didn’t try the simulator which was said to be on the first floor. Compared to the old photos you see in Wikipedia page for the museum and the pages of TripAdvisor, the current maintenance of the place seems to be poor and not well kept.  You may visit this museum if you are in the nearby areas or if your kids are really into aeronautics.

To limit our usage of social media or not?