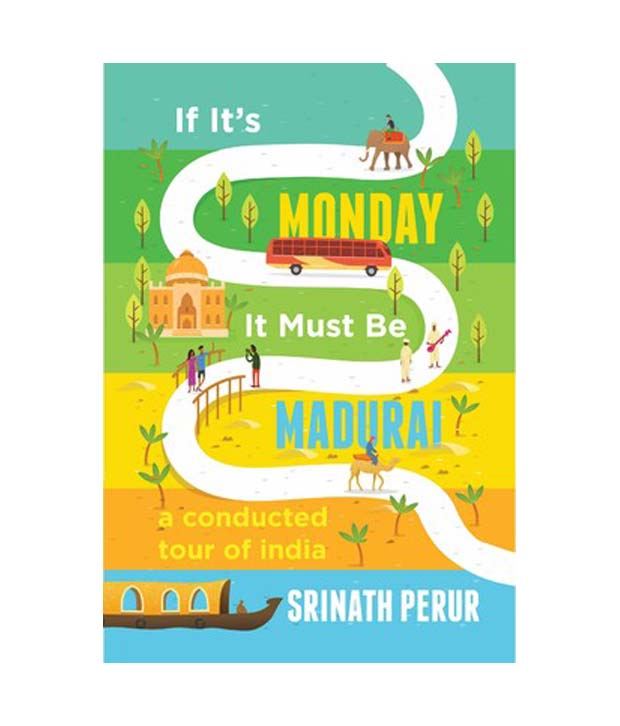 Few months back I read a review of this book “If It’s Monday It Must Be Madurai” by Srinath Perur. Being a travel buff, someone who enjoys travelogues with humour I immediately ordered for it. I got around to reading it this weekend and the experience was a mixed bag.

The book starts off by a question the author gets from Indian Immigration Officer Mr.Pandey at an Airport, “If You’re a writer, then why are you travelling with a group?”, Serious travellers, and certainly travel writers, look upon the conducted tour as the lowliest form of travel. The book is a compilation of experiences of the author on going to about 10 conducted tours across India and Europe between 2011-12,  all the tours where in company of mostly Indians.

The first tour we are taken aboard was across Tamil Nadu for eight days in a Tamil Nadu Tourism bus, travelling south from Chennai to Kanyakumari (tip of India) and back. We encounter mostly retirees and the tour gets to focus on places of worship over other spots. If you have read any of Bill Bryson’s Travelogues you would have seen that for Bryson its not the destination that’s of interest, he never plans his trips in advance, he never has a travel itinerary with him, its all about serendipity and people he encounters; and that’s the secret to Bryson’s book being so enjoyable. Not one chapter of Bryson’s books can be made into a Geography school textbook and that’s why I love them. Srinath follows this style for his memoir of  conducted tours (which of course is entirely opposite to Bryson’s travel mode) that he goes through. In the first chapter of Tamil Nadu tour we get a feeling of travelling along with Srinath in the same bus, we can feel the heat of Tamil Nadu daytimes, the smell of garland shops in front of temples they go to, the huge bathrooms of Tamil Nadu Tourism hotel in a Tanjore Palace, we join him in battling with the TV Remote in Trichy and in Kodaikanal when he climbs up an incline for an Internet care we too take deep breaths.

In the second chapter, Srinath goes on a conducted tour to Europe with a group of Indians. We feel his pain. When I travel abroad I impulsively stay away from the madding crowd of my fellow Indians (I am not proud saying it). I dislike the habit of my fellow citizens doing frequent conversion of price of a coffee to every other expense from local currency (say Euro or USD or Dhirams) to Indian Rupees. You get a feeling as if the Indian Travellers came abroad against their wish and they suddenly discovered that everything outside India is not priced in Indian Rupees. The next I dislike is their disregard for common etiquette like not being loud (in this list I will include residents from India’s neighbours too),  jumping queues  (I know its a clique complaint against Indians but I have to say it, I have myself done it in my initial travels and I consciously made effort to end it). Lastly I never appreciate the idea of cramming as many places in a single day tour, you got to take your time to enjoy each place. When I am traveling abroad to a new place, on Day 1 I like to go on a conducted tour to get an appreciation of the place and overall idea. Then Day 2 onwards I go to places I like on my own pace, sometimes to places I visited on Day 1 conducted tour but this time take in the smell, sounds & visuals of the place without any time pressure. Coming back to the book I admire Srinath’s perseverance of doing the fifteen day whirlwind bus tour of Europe across Holland, Belgium, France, Switzerland, Germany, Austria & UK. For me that would have been a punishment (my sister and family went for one few years back against my better advice), not because of the number of the days, but because you will never have a chance to enjoy any of the places and its a crime to do it for such historic and beautiful places on Earth. And to have Indian Food for Lunch & Dinner every day as Srinath was made to have in the tour is not my travel preference, the best way to get a feel of a place is the local cuisine and I am surprised to find good vegetarian choices even in Japan or Taiwan even when you don’t speak the local language.

At this point, I was enjoying the book so much that I went online and gifted a copy to a friend of mine in Mumbai who has similar taste to mine when it comes to travel.

In the next chapter where Srinath goes to Jaisalmer he gets to be a bit of himself, moving around without a laid down itinerary for all days. He goes camel ride, camping in desert, stay in the fort and so on. Needless to say I enjoyed this chapter.  The next tour of Srinath is to Fort Kochi, where he goes on a conducted tour on a boat in the backwaters which he completes under influence of Toddy. Srinath’s tour to Uzbekistan, a country which he himself introduces to us as one which holds historic places like Samarkund. His tour to Uzbekistan mostly is wasted due to his fellow travellers  in the tour preferring  for only night life activities. I am left wondering on choices people make – if night life is all that they care (which is a personal choice that I have nothing to say) why waste money on a conducted tour in the first place, won’t an Air ticket & Hotel reservation suffix?

After this the book changes gear, turning from a Travel show to a factual documentary. The chapter on the slum tour in Dharavi would have been a nice standalone article but somehow didn’t fit into till then humorous narrative of the book. When I started reading the chapter on Srinath’s tour to Assam & Meghalaya (conducted by Journeys with Meaning) I was thrilled that I will get to know more about a part (North East) of my own country which I know very little of. As a matter of fact I probably know more about South Africa or Turkey (both places I haven’t visited) than what I know of Sikkim or Nagaland (other states in North East India). Unfortunately Srinath fails us by not doing justice to his visits to Kaziranga National Park (my son is behind me for last two years asking me to take him there), Shillong, Khyrim Kingdom or the living bridges of Cherrapunji. Instead of being a travelogue the author veers into social & environmental issues prevalent there. I am not being insensitive to people suffering in this region, but the book jacket didn’t warn me about containing this. I get a similar feeling in his tours of Rajasthan Kabir Yathra and Shodh Yatra to Madhya Pradesh. The grassroot innovations  talked in Shodh Yatra would have made an interesting book by itself. The last chapter of the book (which also its biggest) is about Srinath’s pilgrimage as Warkaris (devotees of lord) to Lord Panduranga temple in Pandharpur from Pune as part of a Wari. The logistical scale of the whole wari event is mind-boggling and inspiring but certainly not humorous which is what I looked for when I bought the book. 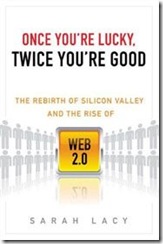 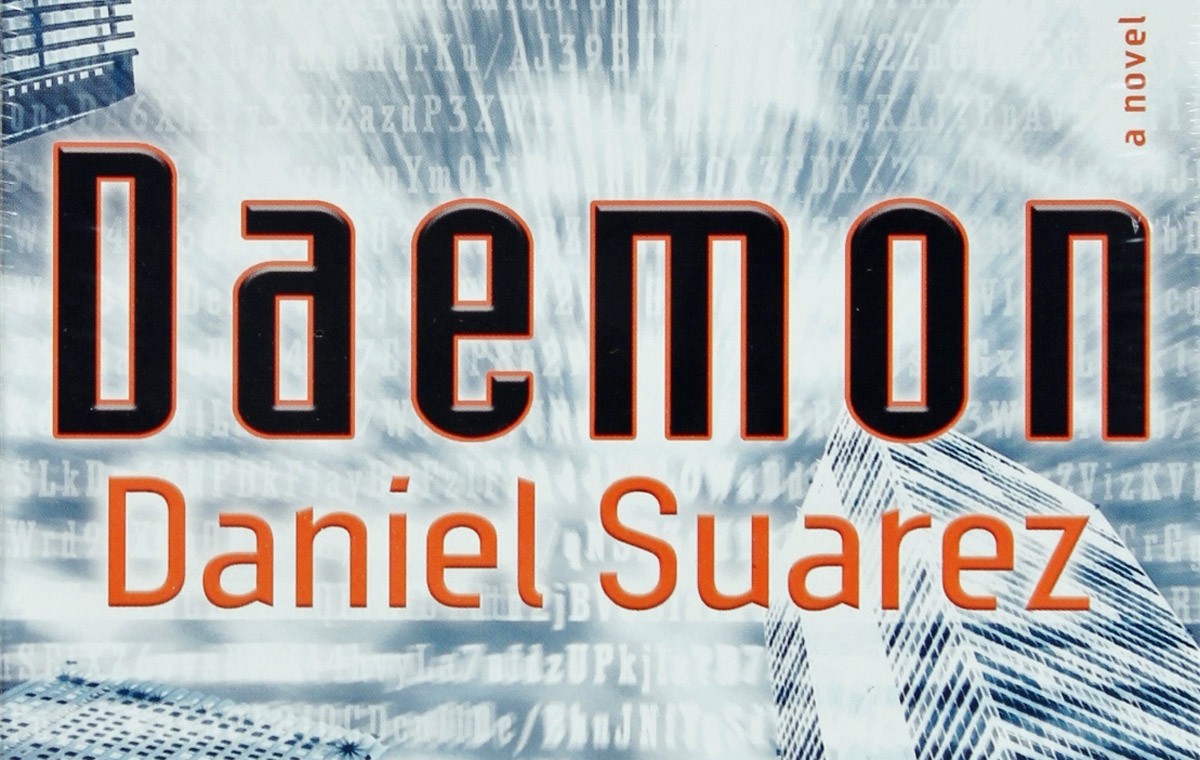 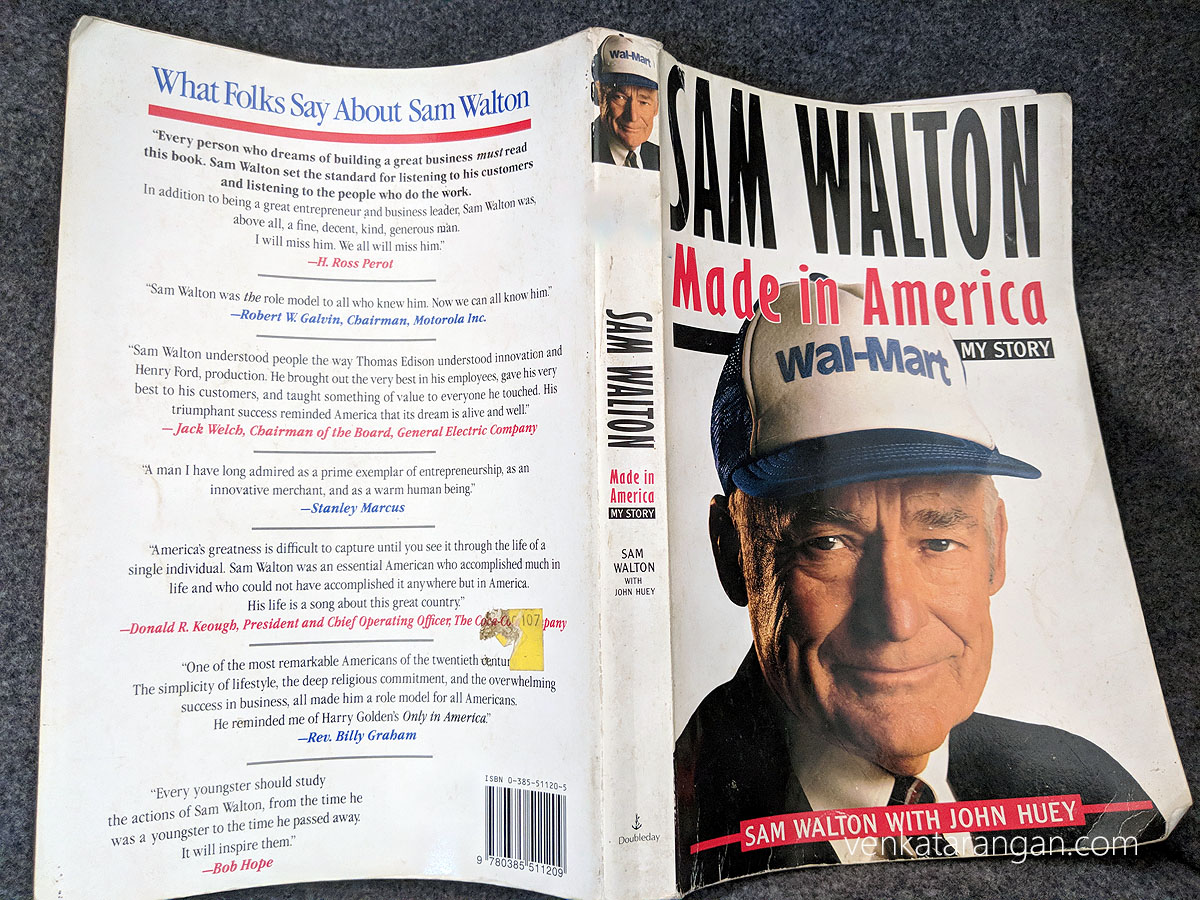 Made in America by Sam Walton