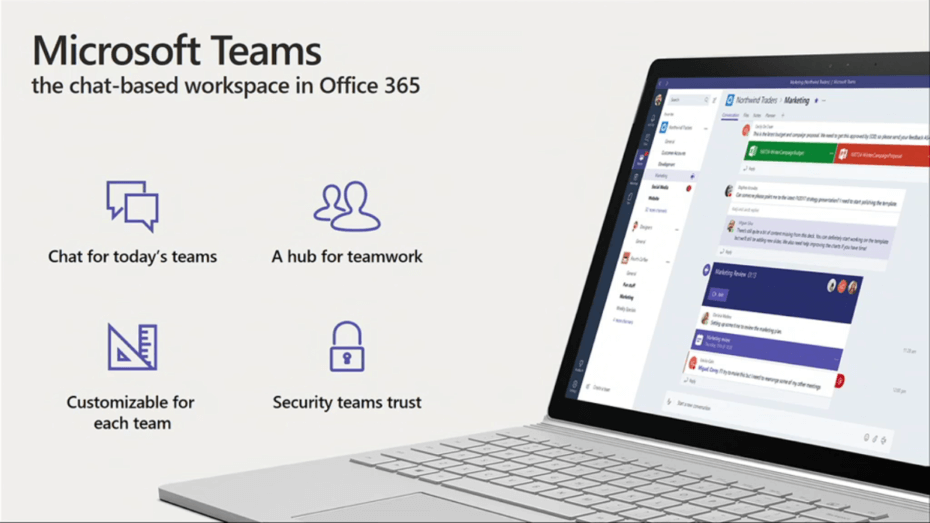 It has been my experience that businesses especially those that are spread across the world need better collaboration and communication tools than what was made available in Enterprises. In the consumer side, whether it’s Facebook or WhatsApp we have apps that are feature rich, easy to use and constantly updated to get new features. Years back when Microsoft acquired Skype (2011) and then Yammer (2012) I thought they will integrate, improve around these products and address the need. Unfortunately Yammer was a disappointment, not in terms of its features but in terms of acceptance and adoption by users. At my firm Vishwak Solutions I tried many times to get my team members to use Yammer, even made an official policy for no use.

Then Slack just happened in 2013. It took the business world by storm; suddenly you were hearing everyone around you using slack; you could order lunch through it’s bot capabilities. The company raised millions of dollars in it’s first year itself valuing it at over $1 Billion making one of the fastest unicorn in history.

Media was buzzing with expectation on some response to Slack from Microsoft; some even suggesting Microsoft to be buying them. For all that the answer came yesterday with announcement of Microsoft Teams. Microsoft’s Teams reinvents communication and collaboration between team members including capability to chat one-on-one, group chat, share files, video calls and even add bots and third-party apps.

To get to use Microsoft Teams, you need to have a Office 365 subscription. Since I already have one, I went to the site and tried to access. I got the below screen saying I need to enable the Teams app in Office 365 admin console. 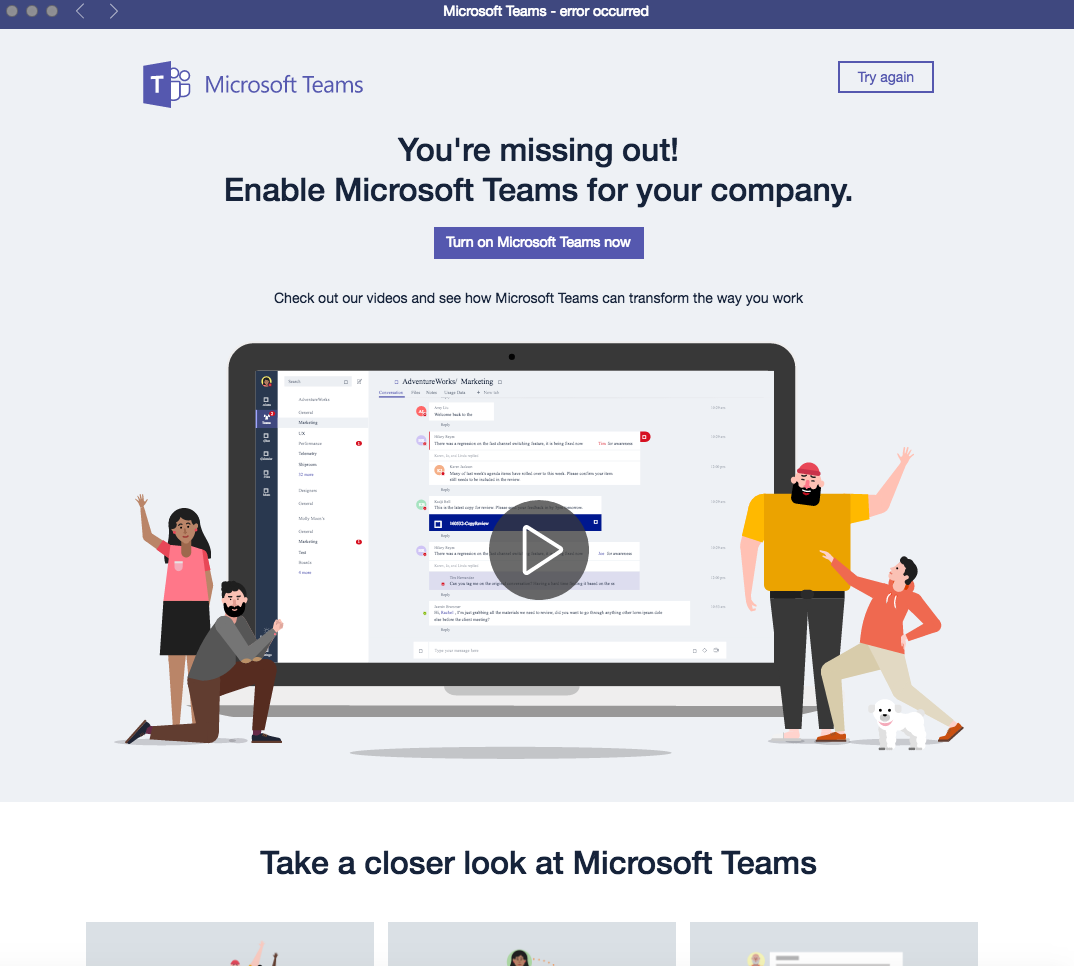 It just took one toggle of switch to turn on Microsoft Teams from Office 365 Admin centre to enable it for my tenant. 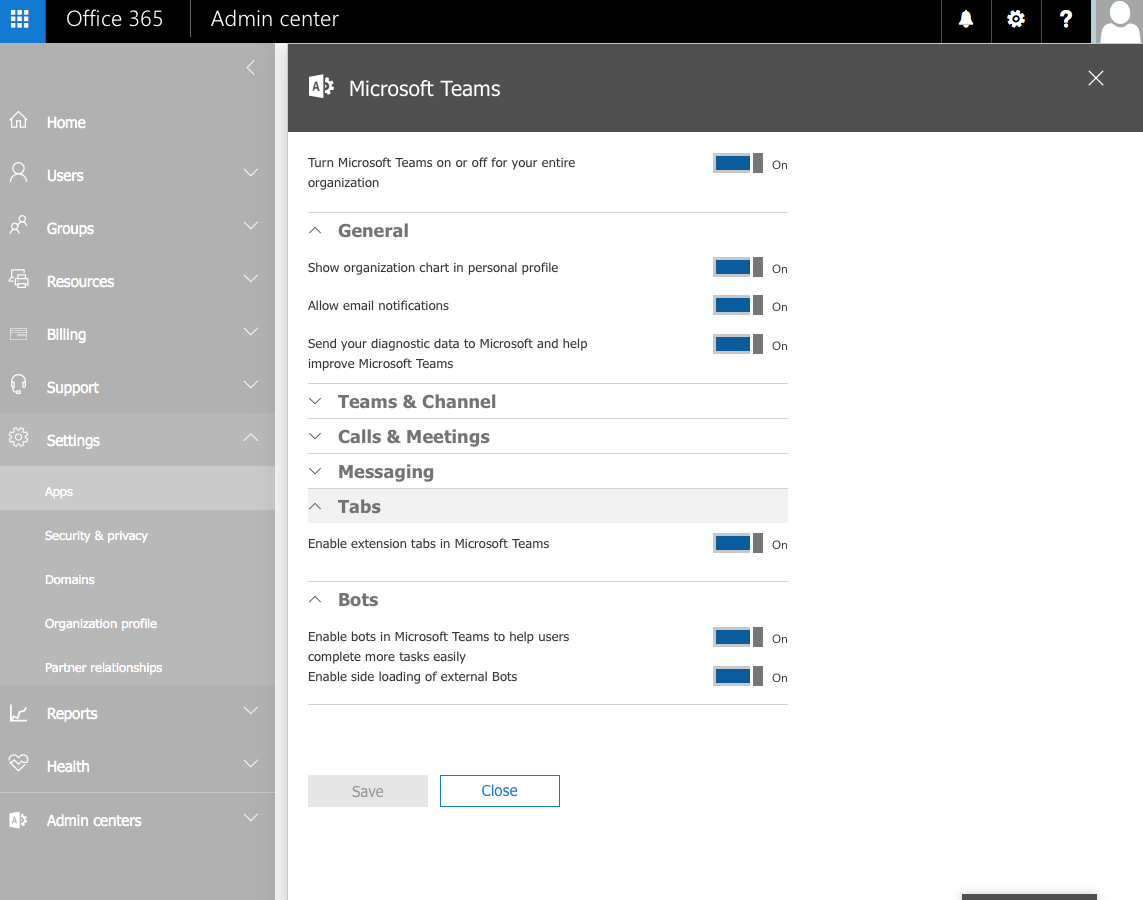 Using Teams is a matter of going to the site from any compatible web browser (Google Chrome or Microsoft Edge, Safari support is coming soon). 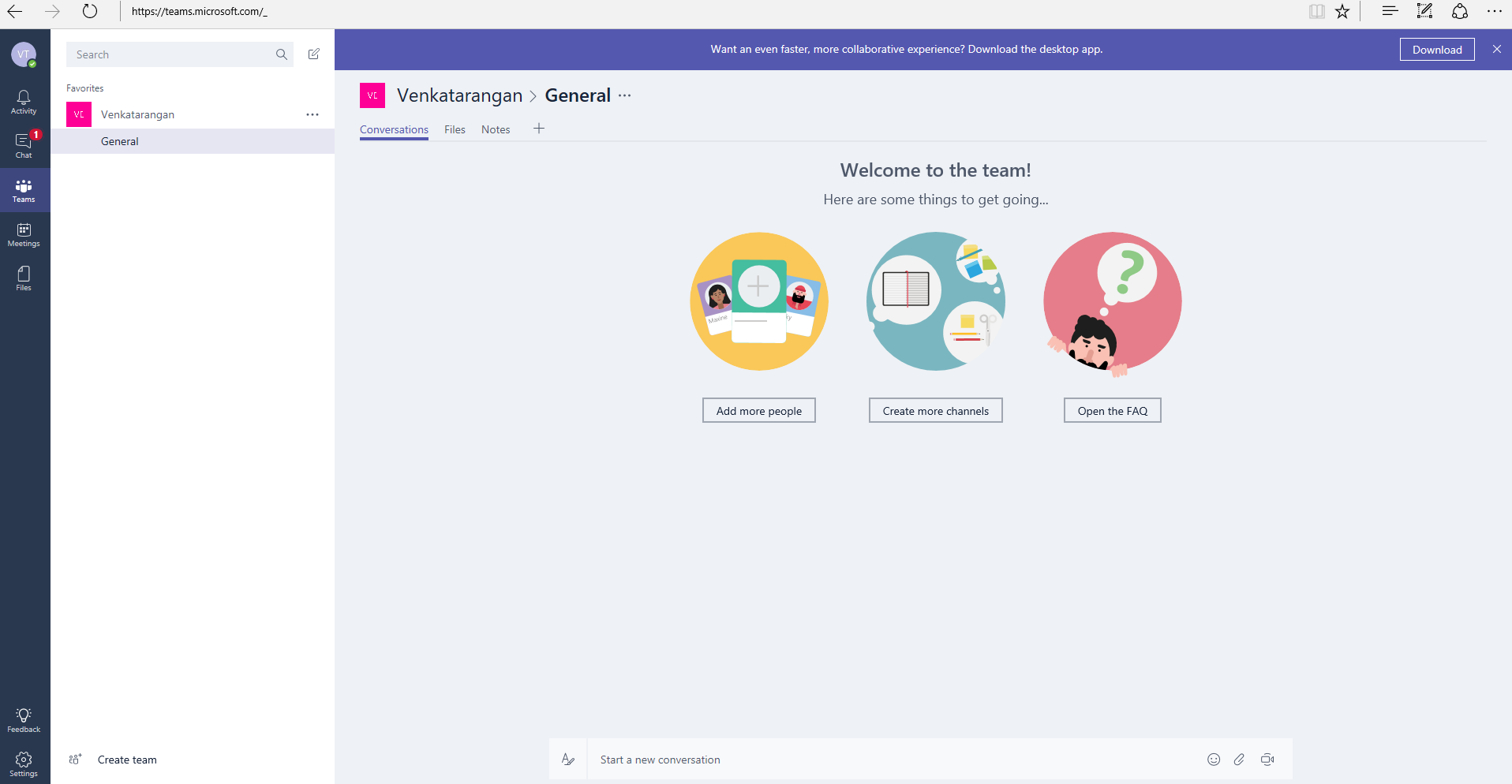 There are apps for Microsoft Teams, I downloaded and installed the app for Mac OS X. It was fast and smooth experience. 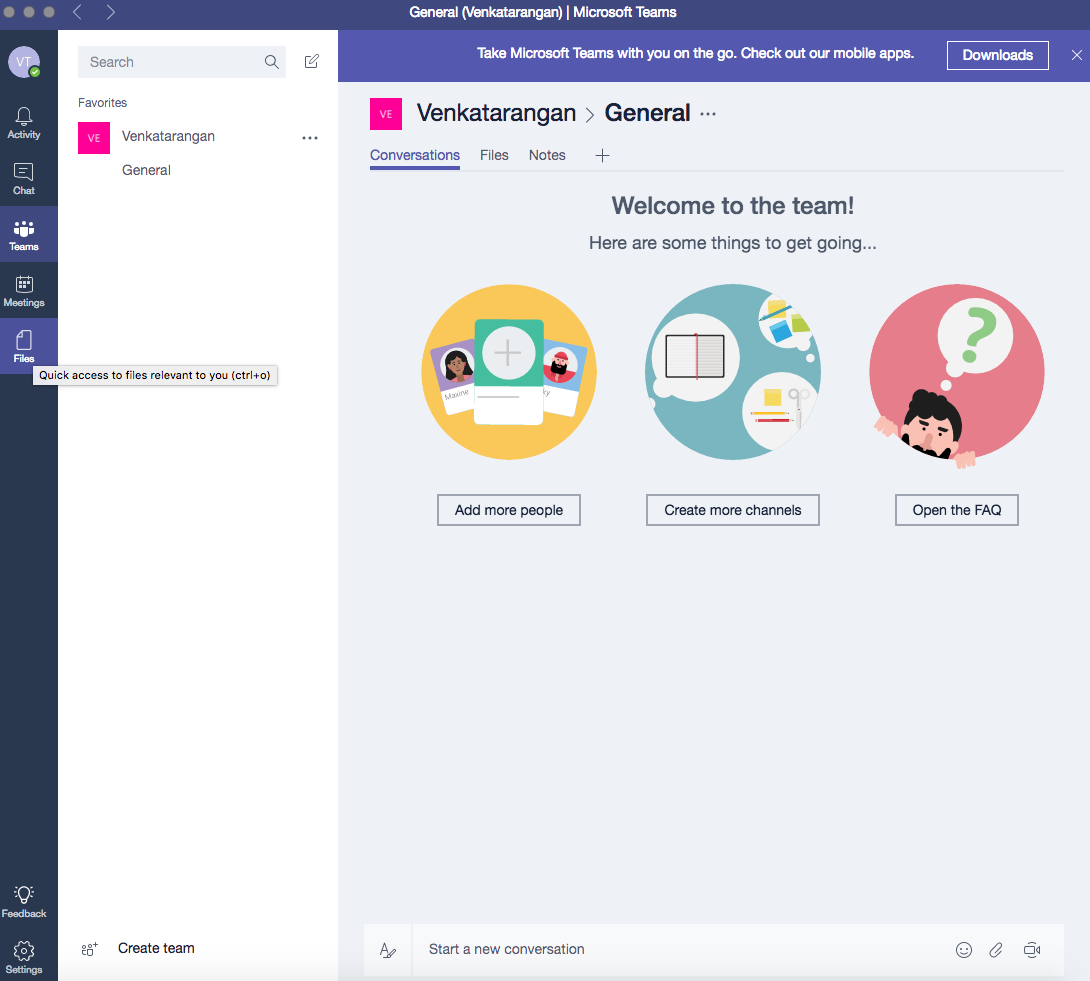 There are app versions for other platforms including Windows 10 (seen below), iOS and Android. You get same functionality across platforms. Apart from Chat, Microsoft Teams allow you to add Bots (to integrate to your backend apps through Chat interface), Tabs (surfacing your web apps) and connectors. Out of box there is a bot called T-Bot (seen below) that allows you to ask questions about how to use Microsoft Teams and offering help. 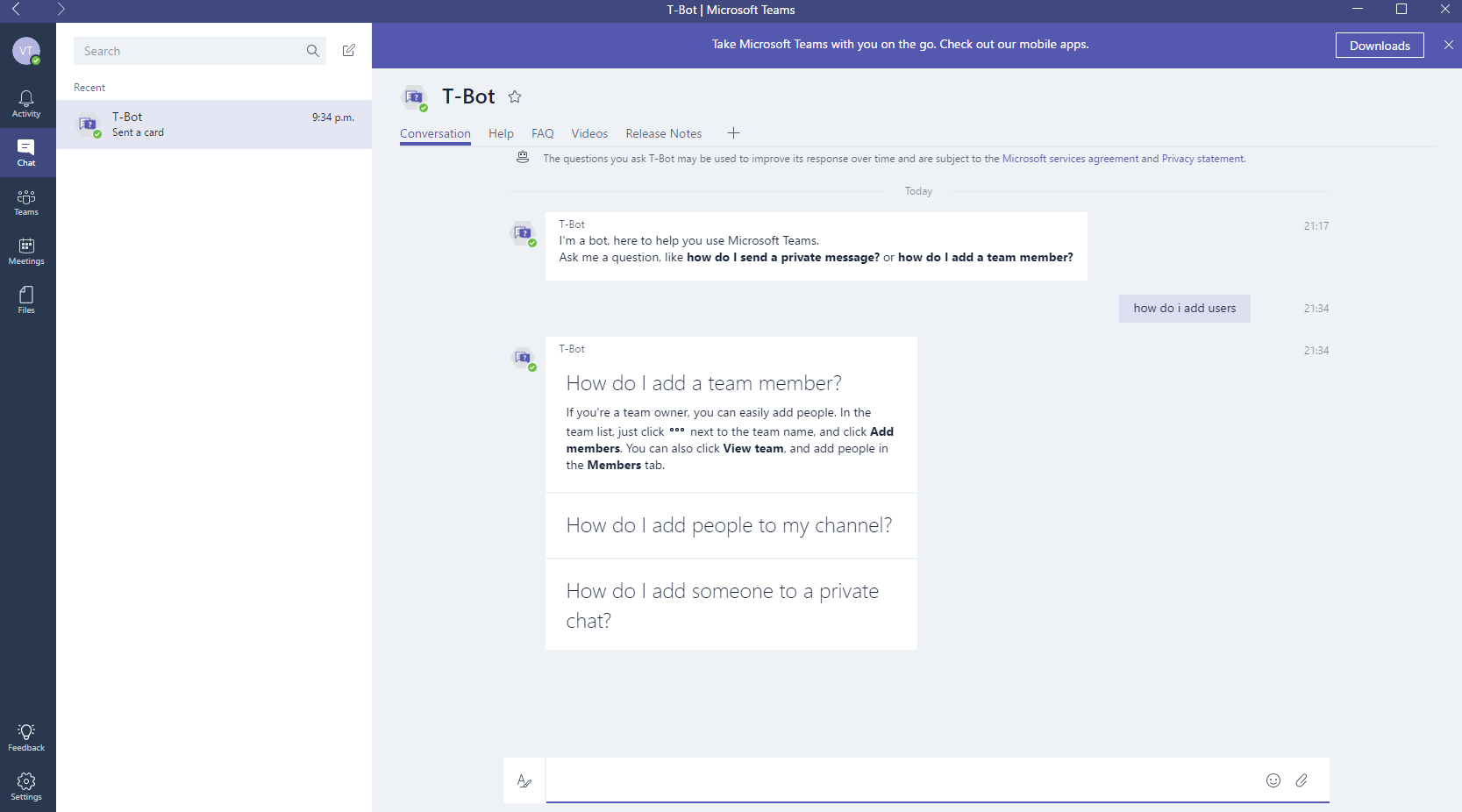 You can read Office Dev Center on how to write your own Tabs, Bots and Connectors for Microsoft Teams. 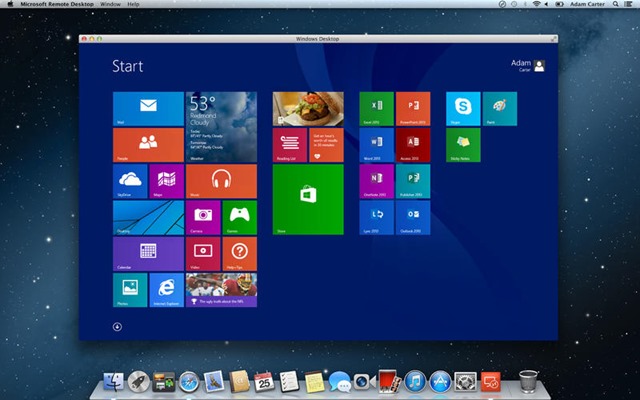